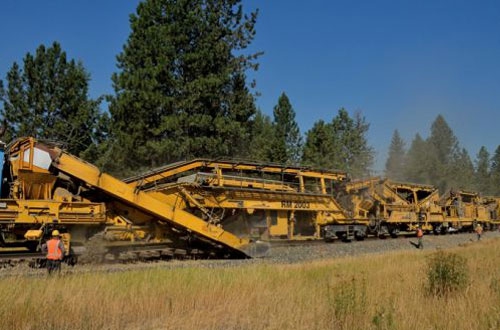 A UP undercutter manufactured by Plasser American cleans ballast on its way northward through Elmira, Idaho.
Bruce E. Kelly

Track projects this summer in northern Idaho are expanding capacity on a busy segment of BNSF's Northern Corridor, and upgrading conditions on Union Pacific's (UP) route to the Canadian border.

UP announced in June that it was “boosting safety and efficiency with an approximately $34.1 million infrastructure investment in Idaho this year.” In northern Idaho, that investment has involved $13.3 million to replace 29 miles of rail (particularly in curves) from Athol northward to Eastport (where UP interchanges with Canadian Pacific), $9.9 million to clean and replace ballast between Athol and Naples, and $1.8 million to replace 8,265 ties between Athol and Eastport.

Over the past three years, UP has also added Centralized Traffic Control (CTC) to the south end of its Spokane-Eastport line. Dispatcher-controlled switches entered service on a siding at Trentwood, Wash., in 2014, and continuous CTC went live from CP Lee Street in Spokane, Wash., to CP035 in Garwood, Idaho, in 2016. The remaining 104 miles from Garwood up the Idaho panhandle to Eastport is currently “dark” (un-signaled) track warrant territory, with the exception of signals protecting movement over a BNSF at-grade crossing in Sandpoint and a slide fence zone north of Bonners Ferry. UP plans to extend CTC northward from Garwood and install two new sidings (one at Garwood, one near Meadow Creek) in the near future.

BNSF has spent much of 2017 widening capacity between Spokane and Sandpoint, an area that some refer to as “The Funnel” because it channels multiple main lines from the west and east onto a single corridor. Previous expansion was performed here in the late 1990s when BNSF created nearly 40 miles of dual main line on what had previously been a mostly single-track railroad with sidings, followed by the opening of BNSF’s run-through refueling facility at Hauser Yard in 2004.

Director-Public Affairs Gus Melonas says, “BNSF is making significant investments in 2017 to reconfigure and add main line trackage with improved train efficiency across the panhandle as the goal.” Those investments include adding three miles of second main track between Athol and East Ramsey and nearly six miles of second main track between West Ramsey and Rathdrum, with the siding at Ramsey being upgraded to main line condition. In the photo, BNSF rolls international containers westward between Athol and Ramsey, past the newly-laid second main.

Meanwhile, for the east end of Hauser Yard, Melonas reports that BNSF employees are converting an existing yard track into a third main line into the Hauser fueling area, which is expected to be complete by the end of September. New switches have been installed, and a lead track for the refueling facility has been extended eastward. Trains arriving or departing either the fuel pad or the yard had to previously share a common turnout off the main line, but there will now be more capacity for independent, simultaneous train movements in and out of East Hauser.

Completion of these projects will leave BNSF’s 68-mile Spokane-Sandpoint Funnel with three short segments of single track totaling less than ten miles. Melonas says, “Future plans (date not determined officially) could include adding double track from West Algoma to Cocolalla, Idaho. A second bridge at Sandpoint will also be constructed across Lake Pend Oreille, which will allow for additional operations flexibility with the convergence of the BNSF Hi Line and Montana Rail Link lines.”