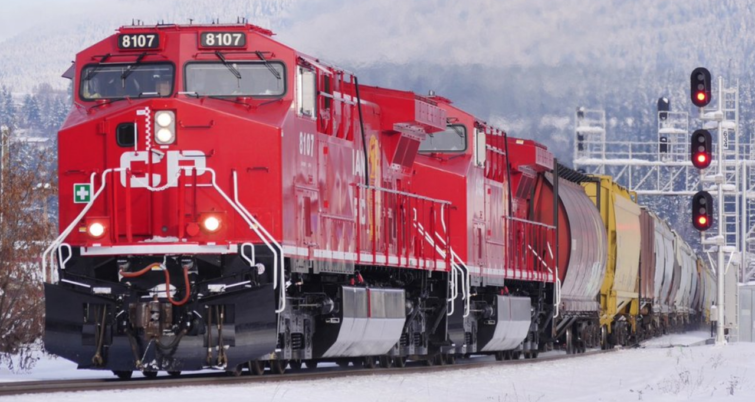 A shutdown of Canadian Pacific (CP) train operations began March 20, following an ongoing dispute between the Class I railroad and the Teamsters Canada Rail Conference (TCRC). However, on Day 2, the parties remain at the bargaining table.

“Second day of a work stoppage, but CP and Teamsters Rail remain at the table,” Canada’s Minister of Labor Seamus O’Regan said in a statement on March 21 at 10:47 a.m. EDT. “We have faith in their ability to reach an agreement. Canadians expect them to do that ASAP. Here in Calgary until they do.”

On March 20 at 9:03 p.m. EDT, O’Regan posted on Twitter: “Floods, COVID, and now a war in Europe. Canadians have been through so much. As we say in Newfoundland, their nerves are rubbed raw. CP Rail and Teamsters know that. And that’s why we need to find as deal. ASAP.”

TCRC—which represents approximately 3,000 CP locomotive engineers, conductors, and train and yard workers—on Feb. 10 reported that it was involved in a dispute with the Class I railroad over wages, benefits and pensions, and that it had served notice to the Minister of Labor in accordance with the Canada Labor Code.

On March 16, CP issued to TCRC a 72-hour notice of its plan to lock out employees on March 20 if union leadership and the Class I were unable to come to a negotiated settlement or agree to binding arbitration. “We take this action with a view to bringing this uncertainty to an end,” CP President and CEO Keith Creel said at that time.

But at 12:01 a.m. EDT on March 20, Minister of Labor O’Regan announced the work stoppage via Twitter. And at 2:28 a.m. EDT, CP reported that while the company was still engaged in negotiations facilitated by federal mediators, TCRC “withdrew its services” and issued a news release that “falsely claimed that CP had initiated a lockout.”

“We are deeply disappointed that, in the final hours before a legal strike or lockout was to potentially occur, the TCRC Negotiating Committee failed to respond to the company’s latest offer that was presented to them by the federal mediators,” CP President and CEO Keith Creel said.

Also at 2:28 a.m. EDT, TCRC issued a second news release, reporting that in addition to the lockout, the union was “on strike at CP throughout the country.” It noted that “[w]ages and pensions remain major stumbling blocks. However, also at issue in these talks are working conditions that call into question the railway’s capacity to recruit and retain workforce members.”

For details on negotiating history and the issues and consequences of a work stoppage, visit the CP website.

Among the shipper groups issuing statements on March 20:

The Mining Association of Canada (MAC) “expresses serious concern regarding the damaging effects the dispute and resulting strike between Canadian Pacific Railway (CP) and the Teamsters Canada Rail Conference is having on the mining sector and the broader Canadian economy.

“‘As the single largest industrial customer group of Canada’s railways, the mining industry has seen firsthand how detrimental unpredictable work stoppages are to Canada’s reputation as a reliable trading partner,’ said Pierre Gratton, MAC’s President and CEO. ‘With global supply chain fluidity having been heavily strained in recent months due to sharp swings in consumer demand during the pandemic and disruptions to global shipping this strike could not come at a worse time.’

“Canada’s strength in mining rests on its ability to produce and process minerals competitively and to transport products efficiently to and from domestic and international markets. These production, processing and transportation activities form the base that allows the industry to stay globally competitive.

“‘The mining industry is the Canadian rail system’s most significant customer and in 2019, shipments of coal, iron ore, potash, and other minerals and metals represented 52.5% of total Canadian rail freight volume,’ said Gratton. ‘The majority of this production volume is shipped to international customers, accounting for 21% ($102 billion) of the total value of Canada’s total domestic exports in 2020, and consistently contributes positively to Canada’s balance of trade. Work stoppages such as those occurring at present bring immense additional operational costs to businesses and reduce confidence in Canada as a destination for investment for supply-chain reliant businesses, such as mining.’

“Over the last several years, Canada has witnessed an unprecedented level of disruption in its supply chain through labour actions by railway and port workers, civil disruption in the form of random and sporadic rail blockades and ongoing impacts stemming from COVID-19. The reliability of Canada’s supply chain has deteriorated significantly over the past 36 months, due largely to the number and extent of both regional and national disruptions, including:

“‘MAC has been underscoring for years that the reliability of the supply chain is a significant determinant for mining industry investment given the volume of mineral and metal products transported in Canada,’ concluded Gratton. ‘Canada can and must do better at creating a stable and predictable logistics supply chain that restores greater confidence in Canada’s reliability as a trading partner and the government should make every effort and use every tool at their disposal to address this dispute.’”

Fertilizer Canada “is calling on the federal government to take immediate action to mitigate impacts on the fertilizer supply chain from a work stoppage at Canadian Pacific Railway (CP Rail). A disruption to essential rail service during the crucial spring seeding season will have devastating effects on farmers, the economy, and domestic and international food security.

“While Fertilizer Canada respects the collective bargaining process, we have reached a point where government must urgently act. Every day matters when it comes to government intervention to end the work stoppage.

“Fertilizer is the most important input for crops and is responsible for half of the world’s current food production. Spring seeding is four to six weeks away in Canada and even sooner in the United States. Due to poor rail service leading into the spring season, Fertilizer Canada members are two to three weeks behind inventories, and storage capacity at fertilizer production facilities is lower than normal. There is a brief window when farmers fertilizer their crops and they are counting on a timely supply of fertilizer to maximize their yields.

“‘Canada cannot afford another disruption to our supply chain,’ says Karen Proud, President and CEO of Fertilizer Canada. ‘75 percent of all fertilizer in Canada is moved by rail. During the lead-up to spring seeding, every day, frankly every hour, counts. During this critical time our members rely on uninterrupted rail service to deliver their products to their farmer customers in Canada and into international markets.’

“The agricultural sector is already experiencing supply challenges compounded by the war in Ukraine and cannot withstand anymore disruption. The 2021 growing season saw lower crop yields due to weather conditions. Food security in Canada and internationally depends on maximizing crops this season to make up for last year and fertilizer is critical to this.

“Our members have said that they will be days away from curtailing production and shutting down facilities following a work stoppage, impacting Canadian workers, the economy and food security. After a rail stoppage occurs it can take up to one month for services to return to full capacity.

“The Canadian government needs to ensure that domestic supply of fertilizer is moving freely and there is unimpeded trade and cross-border mobility between Canada and the U.S., which is essential, particularly for the fertilizer sector, due to the highly integrated nature of the supply chains.

“‘A CP work stoppage will bring additional uncertainty to fertilizer markets in the U.S.,’ says Corey Rosenbusch, The Fertilizer Institute President and CEO. ‘The U.S. receives 86% of our potash imports from Canada, much of it by rail. We are in full support of our Canadian partners in calling on the federal government to take immediate action.’

“The federal government needs to develop long-term approaches and a regulatory environment that will ensure that Canada is a reliable trading partner. Since 2019, our members have dealt with work stoppages at Canadian National Railway, the Port of Montreal and now CP Rail. Our member companies operate in a global marketplace and need a transportation system that is not under threat of disruption every two years. There is no other alternative transportation method that currently has capacity or can be brought online in time to mitigate the impact of the work stoppage.”