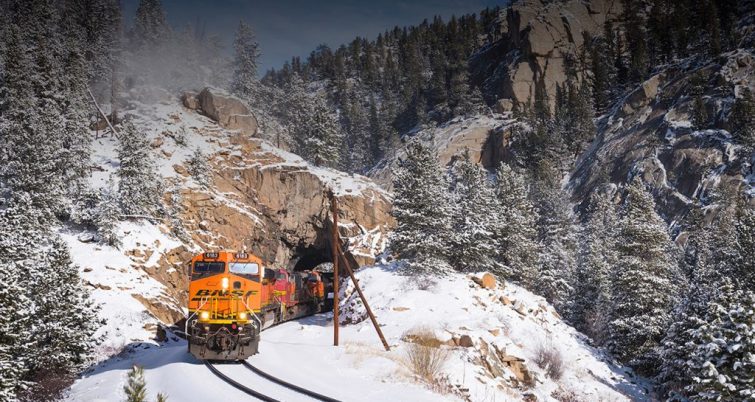 BNSF and other western roads face more snow plowing before the arrival of spring.
BNSF

Although it's already March, and signs of spring are showing in some parts of the country, the railroads serving the western United States and Canada will battle snow for at least the next month. Here is a profile of how BNSF tackles the job.

Snowplows are mesmerizing. These metal titans can sweep through snow and ice, and larger ones can eat away at fallen trees and debris. With such enormous power, only the most adept can handle them. “There’s an art to snowplows,” said Dillon Baier, a Roadmaster in Engineering with 10 years of experience working with the specialized equipment. “You have to find the right timing to protect the track while still keeping the trains running. You have to balance both.”

Snowplow season generally starts during November, and in some higher-altitude or more northern sections of our network, it can last into April. Snowplows are a crucial piece of BNSF’s Winter Action Plans to keep trains moving and protect employee safety.  “Snowplows are vital to railway function. Without snowplows, most rail transit would be shut down for months during the winter,” said Baier. Not only do snowplows keep trains moving, but they also enable access points to stay open for crew changes, allow operators to continue train maintenance, and help mechanical responders reach issues faster.

BNSF’s rail teams have many types of plows to clear out different levels of snow. Jordan Spreaders are unique from other plows because they have a set of wings, one on each side, that can be opened to push blockages off the right of way. “My favorite snowplow is the Jordan Spreader,” said Baier. “It’s the most impressive type of snowplow we have. It can take care of avalanches and heavier snow that smaller teams can’t take care of.”

Russell snowplows, or Fliers, have large front wedge plows and smaller wings on the sides designed specifically to push through snow. Although most Fliers were at their prime in the early 1900s and have since retired, there are some that are still reliably in service. Jeremy Van Pelt, a Division Engineer in Engineering, appreciates the power of Fliers.  “I’m impressed with their ability to plow at track speed, which makes it one of my favorites,” said Jeremy.

In addition to Jordan Spreaders and Russell plows, BNSF also has Rotary snowplows. These titans possess an 11-foot fan and have a total weight of more than 150 tons. Their whirling blades suck in snow and disperse it outwards to clear a path. Rotary plows are used for areas with deeper snow buildup that typical blades cannot reach, such as hills or spots where barriers prevent the snow from being pushed aside. Though slow moving, they are sturdy and effective. Check out our previous Rail Talk article to learn more about Rotary snowplows.

Life as a snowplow operator is not for the weak. In the winter, their schedules are busy, and the climate can be unforgiving. When crew members are inside the snowplow, they must keep the heat off and the windows open to prevent them from frosting over. The only way to keep warm is pure grit and layered clothes. When there is heavy snowfall, teams use a GPS to help with poor visibility, and loud noises in the cab can make verbal communication a challenge.

Fortunately, these teams have many safety protocols to protect employees. Bright, 10-foot poles mark hazardous areas, and these same hazards are also marked on their GPS. Some operators have been working on the same routes for so long that they have it all memorized.

On bigger plows, a buddy system is required so that each operator can watch one side of the train. A bigger plow means more to manage, so having a team ensures that the plows and surrounding area remain safe. When the weather is intense, partners must rely on each other and their GPS to know when to lift the snowplows up and down to avoid hitting obstacles. “You have to have a lot of trust in your partner,” said Baier. “Many of these guys have been working together for a long time.”

What is a typical day working with snowplows like?

A snowplow operator’s day is largely determined by the weather. If the snow is strong, there must be a constant rotation of snowplows to keep the rails open. In the northern regions, the winter season requires snowplows to operate 24/7 for about four months straight, and there is 24-hour crew coverage, with employees working in shifts to make sure team members are well rested. When the weather is lighter, teams use this time to address smaller tasks, such as winging and brooming switches in preparation for the next storm. The brooms used are part of BNSF’s smaller plows, such as the Mini Dozer or Converted Ballast Regulator.

When the snow is heavy, crew members prepare for a busy day. Mornings start with a team briefing to review safety information and go over the day’s plan. This is also a valuable time to put together the proper gear and tools for the weather. It’s important to prepare as much as possible beforehand. The operators never know what they might encounter, so they often bring extra equipment like beacons, probes, and shovels to tackle any kind of emergency. For example, if the team determines there is risk of an avalanche, all crew members working in the field are required to wear an avalanche beacon that projects their location. In addition to preparing their gear, operators must also maintain their rail equipment and make sure everything is ready to go.

Snowplow operators are typically required to work 8-hour shifts or longer during the coldest seasons to keep the plows running. On busy days like this, managers try to find ways to support their crew members. “We try to make sure our guys are taken care of,” said Van Pelt. “We know how hard they work to keep the railroad open.”

What do you wish people knew about snowplows?

Snowplows are fascinating to watch and a fantastic representation of overcoming the dangers of nature, but Baier warns that snowplows can be dangerous to trespassers who venture near snow-covered track. “Cross country skiers and pedestrians should stay away from the rails. Going across the tracks can seem like a nice shortcut, but snowplows move fast and throw snow and debris around. It can be hard for people to see them until it’s too late.”

This article was produced by BNSF as part of their “Rail Talk” series and used with permission. For more “Rail Talk” articles, please visit the BNSF website.