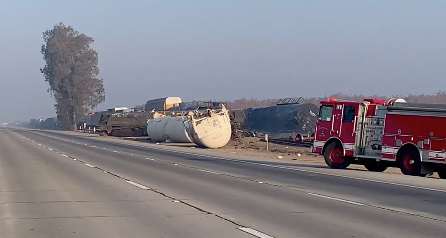 A Union Pacific train carrying hazardous material has derailed in California, forcing the closure of Highway 99.

About seven train cars left the tracks, and according to the California Highway Patrol most involved in the wreck were tanker cars. Hazardous materials were seen pouring from the accident site, which forced Highway 99 to shut down between Avenue 384 and Betty Drive.

Police are speculating that the train was moving at full speed when the accident occurred. Union Pacific officials also were at the scene trying to figure out what went wrong. No injuries have been reported.

Highway 99 was expected to be closed for several hours on Nov. 23 as clean-up crews dealt with the situation.