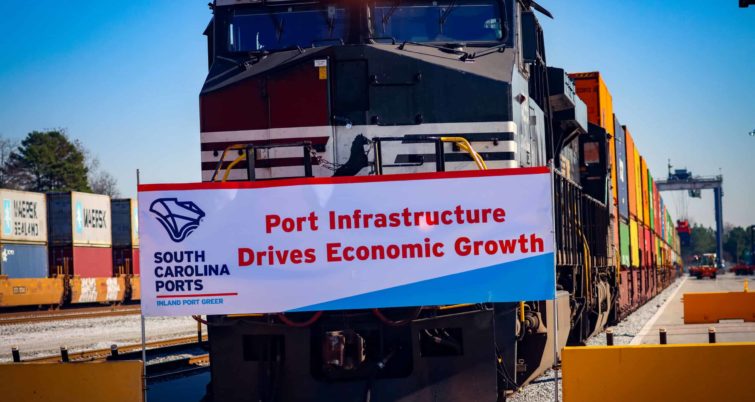 The South Carolina Ports Authority announced that the first phase of an Inland Port Greer rail expansion is finished.

In a press release, the Authority said “SC Ports’ teammates, elected leaders and community partners gathered today to celebrate the completed rail expansion at Inland Port Greer. They also touted the next phase of expansion that will double cargo capacity at the rail-served inland port.”

“Nine years into operations, we are thrilled to be expanding the cargo capacity and rail capabilities at Inland Port Greer to better serve our customers’ supply chains,” SC Ports President and CEO Barbara Melvin said. “We are proud to play a role in supporting Upstate companies’ success. The growth of Inland Port Greer has truly been on the fast track.”

Inland Port Greer operates 24/7 and runs similarly to a container terminal, with operators moving containers on and off trains instead of ships.

“Before this facility opened, one truck driver could go to Charleston and back in a day. Now that same truck driver can come here five to 10 times a day to load and unload containers,” Inland Port Greer Terminal Manager Will Angelich said. “Inland Port Greer provides efficiencies and reliability for companies’ supply chains. I am very proud of our team of 60-plus people for their dedication to keeping the supply chain fluid.”

SC Ports’ two rail-served inland ports also generate environmental benefits for South Carolina. The S.C. Energy Office estimated that use of both Inland Ports Greer and Dillon in 2021 minimized carbon emissions by roughly 11,500 tons and saved an estimated 970,000 gallons of diesel fuel, compared to using only trucks to move an equivalent amount of cargo.

The first phase of expansion involved building an additional rail processing track and two rail storage tracks within the terminal. The addition of 8,000 feet of new rail will meet cargo demands through 2040.

The next phase of expansion involves expanding the container yard by 15 acres to the east and the west to handle 50% more cargo.

The expansion also involves doubling the size of the existing chassis yard capacity and building new facilities for heavy lift maintenance and terminal operations. The full project is slated for completion in winter 2024.

The more than $30 million expansion is funded by both SC Ports’ revenues and a portion of a $25 million BUILD (Better Utilizing Investments to Leverage Development) grant. The grant was awarded to the S.C. Department of Transportation for its Upstate Express Corridor Program.

“The expansion of Inland Port Greer adds more space for containers and trains to meet the capacity needs of our customers,” said Ed Stehmeyer, SC Ports’ general manager of projects and design. “The goal of the terminal expansion is to bolster the Upstate intermodal infrastructure supply chain and further develop the inland terminal to handle more cargo for our customers.”

With the support of the SC Legislature, SC Ports is also building the Navy Base Intermodal Facility in North Charleston. This rail-served cargo yard will move more cargo to and from Inland Ports Greer and Dillon, efficiently transporting goods throughout the state.

The Navy Base Intermodal Facility will be served by Norfolk Southern, CSX and Palmetto Railways when it opens in July 2025. The modern cargo yard will sit one mile from Leatherman Terminal to ensure speed-to-market for port-dependent businesses throughout the Southeast.

“We are continuing to invest in critical port infrastructure around the state to provide more connectivity, capacity and fluidity for our customers,” Melvin said. “Our infrastructure investments help Upstate companies be successful, which supports new jobs and opportunities in the region.”