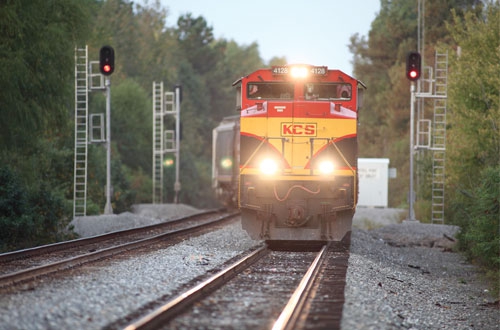 KCS’s second bridge span will speed movement of freight between the U.S. and Mexico.
File photo

The number of trains moving between the United States and Mexico is about to double.

On September 2, RT&S reported that Kansas City Southern (KCS) planned to break ground on a second span of an international bridge that would double the number of trains moving in and out of Mexico.

This week, KCS ceremonially broke ground on both sides of the new International Railroad Bridge spanning the Rio Grande from Laredo, Texas, to Nuevo Laredo, Tamaulipas. This new bridge will be constructed alongside the existing bridge and is estimated for completion by year-end 2024.

“Today marks the start of construction of a new railroad bridge to meet the needs of North American commerce in the future,” said KCS president and CEO Patrick J. Ottensmeyer. “Upon completion, the second span of the International Bridge will keep Laredo-Nuevo Laredo at the center of North American trade and make this vital USMCA trade corridor safer, more fluid and secure, and relieve traffic congestion in Laredo and Nuevo Laredo. This significant private investment in infrastructure, along with the proposed combination of Canadian Pacific and KCS, pending regulatory approval, will connect customers on both sides of the border to new markets, enhance competition in the U.S. rail network and drive economic growth across North America.”

This new international bridge includes construction of a structure paid for entirely with private KCS funds. It will be constructed on the right-of-way roughly 35 feet from the existing bridge, allowing trains to operate in both directions at the same time. The bridge will be roughly 1,150 feet long. U.S. and Mexican construction crews will work concurrently on each side of the international border to complete the project. The project will also include renovation of the existing U.S. Department of Homeland Security/Customs and Border Protection building in Laredo and reconstruction of a KCS Operations Security Building in Nuevo Laredo.

The existing single-track bridge is the only railroad bridge crossing of the Rio Grande River linking Laredo and Nuevo Laredo, and is the essential link in this international border crossing corridor. The U.S. Presidential Permit for construction of the new single-track span bridge was received in July 2020. Since 2020, KCS has been in the project engineering and design phase as various construction permits were obtained in the U.S. and Mexico.