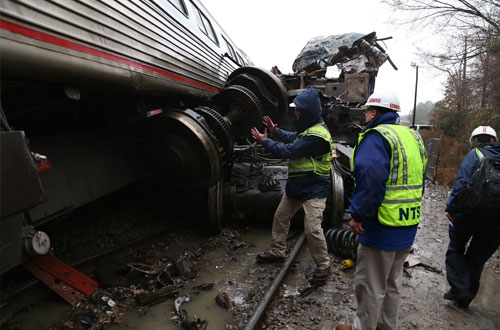 NTSB investigators assess the damage caused by the collision of an Amtrak train and a CSX train Feb. 4, 2018.
NTSB

On Monday, September 30, the National Transportation Safety Board (NTSB) issued its final report on the head-on collision of an Amtrak passenger train with a stopped CSX freight train in Cayce, S.C.  The Amtrak train engineer and conductor were killed in the accident, and 91 Amtrak passengers and crew members were injured.  The accident occurred on February 4, 2018.  In the final report, the NTSB detailed the probable cause of the accident:

The National Transportation Safety Board determines the probable cause of this collision of trains was the failure of the CSX Transportation Corporation to assess and mitigate the risk associated with operating through a signal suspension, which eliminated system redundancy for detecting a switch in the wrong position. The CSX Transportation Corporation conductor failed to properly reposition the switch for the main track, which allowed National Railroad Passenger Corporation (Amtrak) train P91 to be routed onto the Silica Storage track where the standing CSX train F777 was located. Contributing to the accident was the Federal Railroad Administration’s failure to implement effective regulation to mitigate the risk of misaligned switch accidents. Also contributing to the accident was National Railroad Passenger Corporation’s (Amtrak) failure to conduct a risk assessment prior to operating during a signal suspension. (Courtesy:  National Transportation Safety Board).

For the full report, go to ntsb.gov. 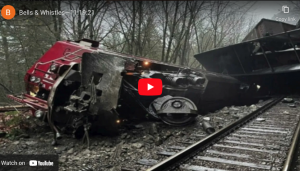