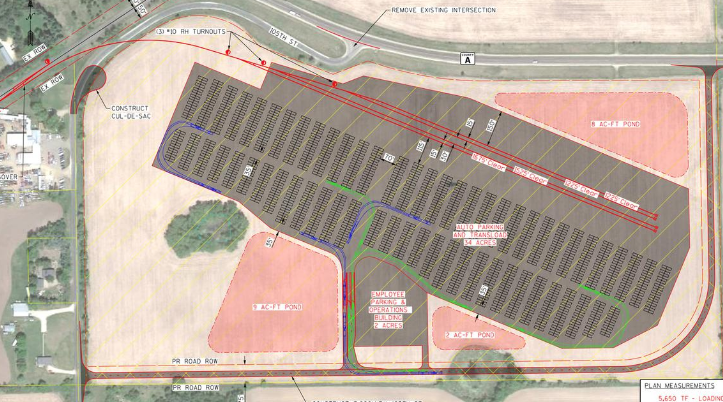 Residents of New Richmond have several concerns about the construction of a rail terminal in their community. Most say it will be an eye sore.

A Canadian National subsidiary is eyeing a piece of property in Wisconsin in the hopes of building a massive rail terminal for automobiles. The town of New Richmond, however, has some concerns.

Wisconsin Central Limited is looking at land at 105th Street and Highway 64. Currently it is a 76-acre farm owned by Robert and Leona Asp. The rail terminal facility would cover 34 acres to create over 2,300 parking slots to distribute about 120,000 vehicles a year. The operation would run 24 hours a day and construction of the terminal would require the property to be rezoned to an industrial area. In order to be rezoned there would need to be amendments to New Richmond’s and St. Croix County’s comprehensive plan.

During a meeting with railroad officials in July town residents expressed several concerns. Many believe a new rail terminal is an eye sore that will only bring down home values and will require police presence to protect against theft. Wear and tear on roads, safety due to increased traffic, and the impact of noise and light pollution were other issues that were brought up. Residents also wanted to know what would happen to the land if the rail facility were abandoned.

The parcel is a key gateway corridor to New Richmond, and city officials are not keen on a rail terminal serving as a welcome mat.