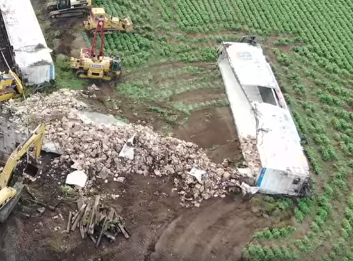 Crews in northwest Iowa are beginning to clear a derailment that happened the evening of July 31. No injuries have been reported at this time.

According to the Sioux County Sheriff’s Department, 25 rail cars were knocked off track. BNSF spokesman Andy Williams says the shipment was 83 cars long, and more than half were empty. The full ones contained denatured alcohol, aggregate and other refrigerated and tanks goods. None of the products are hazardous, but the one carrying the denatured alcohol had a minor leak at a valve.

The cause of the accident is unknown, but it is the third derailment in the state of Iowa in a little over a year. An investigation is currently underway to determine the cause.

To see drone footage of the aftermath, click here.