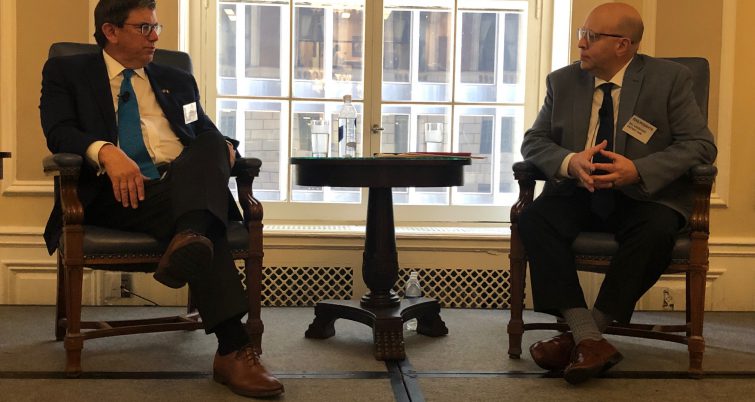 Tariff talks between Mexico and the U.S. continued on June 6, with Mexico claiming progress was being made. President Trump, however, was not as optimistic.

Trump said “a lot of progress” must still be made for the southern border to avoid a 5% tariff on goods. The President wants Mexico to handle the problem of illegals crossing the southern border into the U.S. Mexican Foreign Secretary Marcelo Ebrard was at the State Department the morning of June 6, and additional staff-level talks were underway at the White House between Trump’s legal counsel and other Mexican aides.

U.S. officials, however, are expecting the tariffs to kick in on Monday, June 10. At Rail Insights 2019 held in Chicago June 5 and 6, Kansas City Southern President and CEO Patrick Ottensmeyer said a very small minority believe tariffs against Mexico are a good idea.

“I have not heard anyone but [White House trade advisor] Peter Navarro and President Trump that think this is a good idea,” Ottensmeyer said. “The Mexican delegation is here and hopefully they will make some progress.”

Meanwhile, over on Capitol Hill lawmakers have warned the Trump administration that they will block any attempts to apply tariffs on Mexican goods, and leadership in the Senate believes they have enough to even override a veto from President Trump.