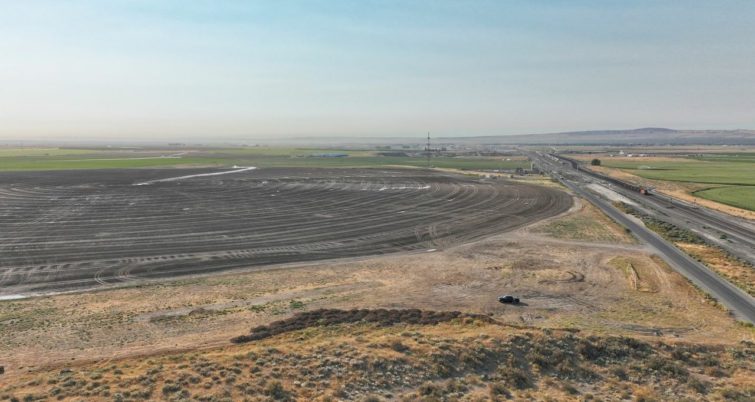 The Reimann Industrial Center was named BNSF’s first Certified Site in the State of Washington.

The $3.6 million, which was secured on Dec. 22 when Congress approved the Fiscal Year (FY) 2023 omnibus appropriations bill, will go toward the construction of 6,100 feet of industrial rail that will serve the Darigold project and future businesses that locate on the Port’s remaining land at Reimann. The last mile of rail, the Port says, will directly connect with the BNSF Railway (BNSF) yard, “ensuring the Reimann Industrial Center will support multimodal transportation.” The Reimann Industrial Center was named BNSF’s first Certified Site in the State of Washington.

The FY 2023 Congressionally Directed Spending approved for the Reimann Last Mile Industrial Rail project will fill the final funding gap in a $25 million project that has been funded, up until now, with committed local and state funding.

“The Port of Pasco is excited and grateful to receive this funding,” said Vicki Gordon, President of the Port of Pasco Commission. “Our congressional leaders served as great champions of this important project, especially Senator Patty Murray and her staff. Without their support, the Port would have been highly challenged to secure the critical project funds.”

“The Port of Pasco has been fortunate to have strong support for the development of the Reimann Industrial Center from multiple community partners,” Executive Director Randy Hayden said. “Darigold is the single largest project to locate at a Port of Pasco industrial center. Winning this project wouldn’t have been possible without the support and infrastructure investments made by the City of Pasco, Franklin County, Franklin PUD, several state legislators, and now our congressional delegation.”

To bring public utilities and infrastructure to the Reimann, the Port says it will reconstruct and widen Railroad Avenue, install municipal water and sewer, and relocate a natural gas pipeline.

In 2021, the Port of Pasco received a $7.5 million Capital Budget award from the Washington State Legislature. Franklin County awarded the project $2.3 million from its Economic Development Fund. The Port will also “utilize the state’s new Tax Increment Financing law to issue general obligation bonds to cover about $9 million of the total project budget.

Darigold broke ground on its project in September and has started the initial phase of site development on 150 acres of the Reimann. The company says it plans to invest $600 million and construct “the largest milk processing facility in North America.” Operations will commence in 2024 after constructing nearly 500,000 square feet of structure.

The Darigold project, the Port says, will create more than 200 high paying jobs at the facility. Those employees will earn wages that exceed Franklin County’s current median wage. Dairy operations around Central Washington will also add about 350 new jobs. Approximately 500 indirect jobs,which will come from third party companies that provide products and services to the new Darigold facility, are also anticipated.

“Darigold’s private investment will uplift and support Pasco for years to come,” Hayden said. “Along with great wages and career opportunities, the project will increase local tax revenue, providing a significant boost in funding for local schools and community services.”