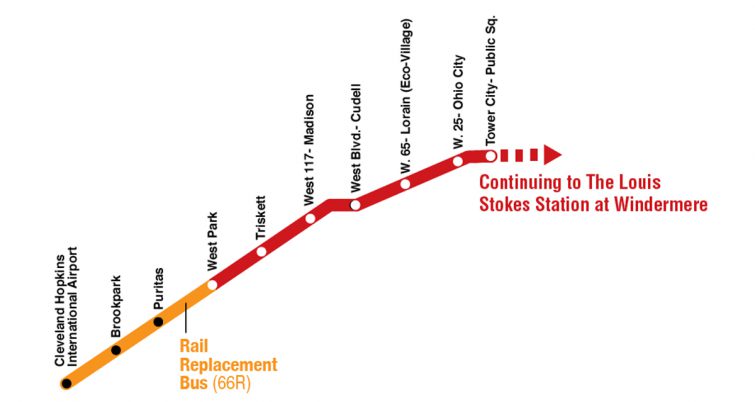 Cleveland RTA recently alerted passengers that from June 2 through June 29, Red Line rail service between West Park and Cleveland Hopkins International Airport will be replaced with 66R buses due to extensive track work.

Officials explained that the 3.6 mile rail project, extending between the West Park Station and the Airport Tunnel, is the final portion of a years-long $38 million effort to repair the RTA‘s Red Line.

“Transit systems across the country just like ours are taking this time to focus on the foundation of what makes this country move forward — a strong and sturdy, well-maintained infrastructure,” Caver said in a statement. “We have a $4 billion dollar asset in our rail system, and now we are recapitalizing it, which means we will preserve that asset at a fraction of the cost of new construction and, thereby, bring the system into a state of good repair.”

Caver also explained that during the past six years, RTA has invested nearly $40 million in the Red Line, relying on a combination of funding sources, to reconstruct the Brookpark Station, the Airport Tunnel and the tracks between West Park Station and West 30th Street.

“That’s not to mention all we’ve done on the light rail lines to upgrade and optimize track, modernize our signaling systems and rebuild our substations,” Caver said.

Caver said the investments RTA has made to track improvement projects during recent years have been critical to keep its rail connection up and running.

“Riders not only enjoy and rely on it, but we’ve demonstrated that RTA is an important asset to our community from which this region benefits economically,” Caver added.

Caver cited RTA’s recent economic impact study, conducted by Cleveland State University, which found that transit’s impact on local employment totaled $485.8 million, measured in annual earnings brought home by those who depend on RTA transit services to get to work.