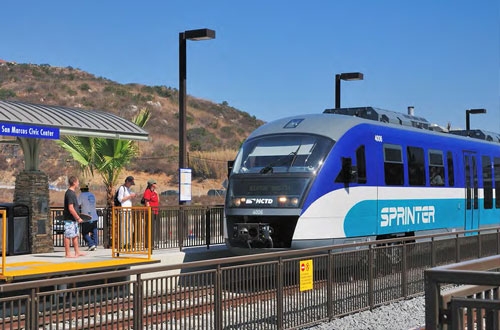 Officials are in favor of building a trench to lower railroad tracks as much as 30 ft in Carlsbad, Calif.
SANDAG

The San Diego Association of Governments (SANDAG) is preparing for nighttime construction activity scheduled to begin July 5 and continue through July 13 to allow for ongoing platform improvements as part of the SANDAG Poinsettia Station Improvements Project in the city of Carlsbad, Calif.

The planned work is set to take place during a Single Track Absolute Work Window (STAWW), a period during which train traffic operates on a single track.

The STAWW will allow for reduced train traffic so crews can safely complete critical work along the rail line, officials said.

Crews will work in 24-hour shifts to maximize construction efforts and expedite work while train traffic is limited. During the STAWW, officials said some trains may face delays of up to 10 minutes.

Crews will work to relocate the eastern track and construct improvements to the existing eastern platform. Work will continue to complete the new pedestrian undercrossing, pour concrete and install piles to support the retaining walls adjacent to the undercrossing bridge, officials said.

The work will entail drilling and demolition operations, require the use of heavy equipment and will take place in between the east and west platform near the center of the project site.

The Poinsettia Station Improvements Project is intended to lengthen and elevate passenger platforms, install a fence between the tracks within the station, relocate a section of the existing tracks, and replace the existing at-grade rail crossings with an undercrossing featuring stairways and ADA-compliant ramps on both sides of the tracks.

Additional station enhancements are set to include new shelters, signage and station lighting. Construction is currently set for completion in 2020.

SANDAG said crews will work to minimize noise and other impacts to surrounding residents.