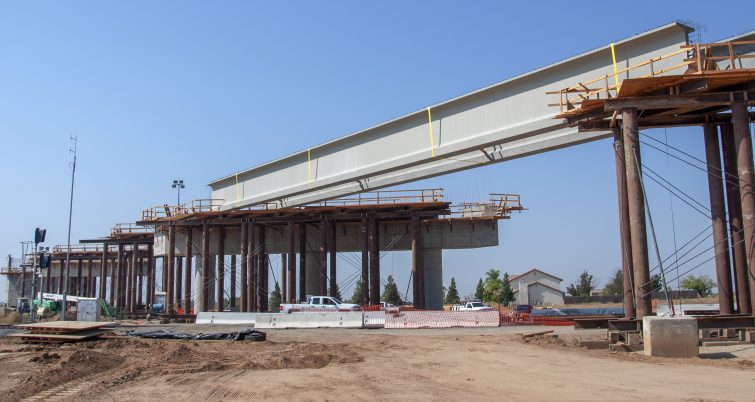 At the northern end of Construction Package 1, large concrete girders are being set for the overcrossing at Road 27 in Madera County. – Sept. 2018.
California High Speed Rail Authority

A bridge built to carry vehicle traffic over the right-of-way of California’s high-speed rail line and BNSF’s main line has suffered from contractor errors and other mistakes, bringing work on the bridge to a halt for the moment, according to a report in the Los Angeles Times.

The Times accessed public records associated with the project, and found that there are possible design problems, steel supports that snapped because of neglect, miscommunication and work damage.

Robert Bea, emeritus professor of civil engineering at the University of California at Berkeley and co-founder of the university’s Center for Catastrophic Risk Management, said that what happened to the bridge is the result of a “horrible sequence of mistakes.”

Construction on the bridge started in 2016, with a timeline of 12 months for completion. However, several years went by, and the bridge was not completed, causing a significant inconvenience for motorists.

Last year was not a banner year for the bridge, either. The bridge is 636 ft long, and high-strength strands of steel supporting it began to snap, with a total of 23 breaking. At this point, an order was issued on Nov. 4 to stop work on the bridge.

A state audit in 2018 concluded that the California High-Speed Rail Authority was too dependent on outside consultants. Gov. Gavin Newsom said he was going to significantly reduce the number of consultants, but many remain employed by the project.

Two people familiar with the situation were critical of the project. William Ibbs, a UC Berkeley civil engineering professor who has worldwide experience working on high-speed rail projects said, “The layers on this project are onerous. The levels of administration and review are very unusual. No one company is going to be wholly blamed if something goes wrong, because they can spread the blame around.”

One executive of a firm working on the project said, “It isn’t getting any better. It is such a pillage of the taxpayers.” 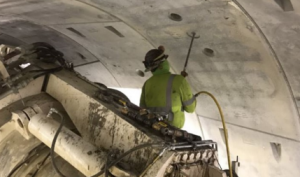 Rail projects are in high gear in L.A. County, but will the momentum continue?

Second high-speed rail segment in Calif. waiting to be cleared