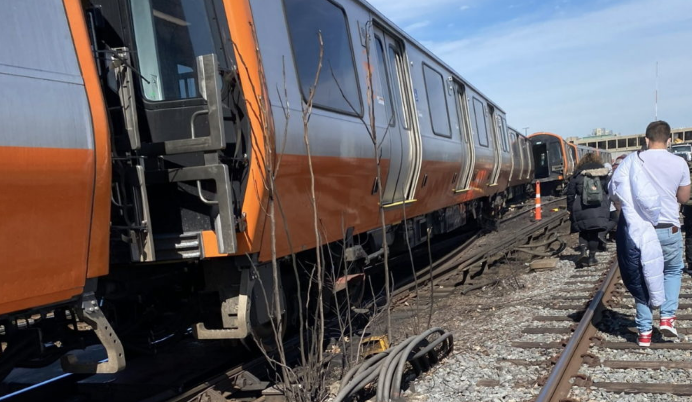 The Vice President of the Rail Security Alliance has written a letter to the U.S. Secretary of Defense.

Yesterday, we reported on the difficulties MBTA is having with newly-built subway cars manufactured by CRRC in its Springfield, Mass. plant. While that story is not really related to the present one, it provides useful background information. For further background on this issue, see this article from our sister magazine, Railway Age. Also, about a year ago, the Rail Security Alliance released a video discussing its concerns about CRRC, which you can view below.

Today, we learned that the Rail Security Alliance, a group of railroad suppliers, wrote a letter on June 1 to Lloyd Austin, the U.S. Secretary of Defense, about its concerns over CRRC’s impact on the U.S. rail car market. While it’s a bit long, we believe this is an important part of this ongoing story.

I am writing to you on behalf of the Rail Security Alliance (RSA). RSA is a coalition of North American rail car manufacturers, rail component suppliers, unions, and steel interests that are committed to ensuring the economic and national security of the North American passenger and freight rail systems, representing an industry that creates 65,000 family-wage jobs and contributes $6.5 billion annually to the U.S. GDP. This alliance was formed in response to the merging of China’s two largest state-owned rail manufacturers into one massive state-owned conglomerate—China Railway Rolling Stock Corporation (CRRC)—in 2015, which is the same year that China announced its military-civil fusion strategy known as Made in China 2025.

By its own estimate, CRRC controls more than 83% of the global rail market,and the company has publicized its aim to dominate the remainder of the market. (1) Little wonder that, through CRRC, the Communist government of China has made aggressive and alarming incursions into the United States rolling stock market through the use of state-backed financing, below-market pricing, and other anti-competitive tactics. These tactics, coupled with CRRC’s interest in undermining the U.S. rail sector, has caused grave concern in the market and among a wide, bipartisan swath of policy leaders who see the need to ensure that the North American rail industry does not fall prey to foreign adversaries.

The disconcerting ties of CRRC beyond simply the national bureaucracy of China are widely recognized and have been summarized in recent reports. The National Defense Authorization Act (NDAA) for FY 1999 instructed the Department of Defense (DoD) to release an annual list of companies that are under direct control of China’s People’s Liberation Army (PLA). On June12th, DoD released its list for 2020, naming CRRC among others such as Huawei and Hangzhou Hikvision as being subject to PLA control. (2) Additional reporting on CRRC and its supply chains has found a well-documented reliance on forced labor, including Uyghurs and forced child labor in Madagascar mines.

Enclosed with this mailing are additional resources that underscore the threat that CRRC poses to the U.S. As DoD prepares to release its 2021 report to Congress on companies with ties to the Chinese military, we urge you to keep CRRC on the list.

CRRC is a 100% state-owned, PLA-controlled enterprise. By its own admission, via a past tweet from its corporate account, CRRC has set out to “conquer” the global rail industry. It has decimated its competition in the past, and we are able to see from CRRC’s record in Australia—which had a domestic industry that CRRC systematically destroyed in a few short years—a clear pattern of aggression and predation (3).

With the Australian rail industry undone by its actions, CRRC has spent six years aggressively targeting the U.S. market, seeking to overtake the U.S. rail manufacturing sector. The use of unlimited state-backed financing has allowed CRRC to enter the U.S. market with competitive underbids for new rail projects, and through those efforts, CRRC has already secured more than $2.6 billion in U.S.taxpayer-supported transit contracts to provide passenger rail cars for the cities of Boston, Chicago, Philadelphia, and Los Angeles. To fulfill these contracts, CRRC has established two rail assembly facilities, in Springfield, Mass. and Chicago, Ill., (4) though the vast majority of the rail cars that CRRC provides through those facilities are manufactured in mainland China and then shipped to the U.S. for final assembly.

CRRC’s rapidly growing presence in the U.S. transit rail industry is destabilizing to vital subsets of American industry and potentially to the vital U.S.-based freight rail car industry. The U.S. freight rail sector supports 65,000 American jobs and $6.5 billion in annual GDP across all 50 states.(5) Yet, much of this is jeopardized by CRRC’s agenda and conquests to date. CRRC has over the past several years had the opportunity to position itself to move next against the considerable U.S. freight rail car industry, a sub- sector of rail not protected by Buy America requirements. CRRC has already attempted to make inroads for such purposes with its launch of the now-defunct Vertex Rail Corporation in North Carolina. Recent reporting on CRRC’s plans to establish facilities in Mexico show that CRRC has its sights set on the North American market.

The capability of the U.S. to freely move products throughout the country is vital to protecting our national security, as well as our economic security. Due in large part to freight rail’s role in the U.S., transporting sensitive military equipment, energy products, agriculture commodities, and toxic chemicals, among other things, the Department of Homeland Security named freightrail as “critical infrastructure” under Presidential Policy Directive 21. (7)

With the incursions CRRC has made thus far, China’s PLA now has active footholds in two of America’s largest cities, on American soil, and it is providing passenger rail cars to transit agencies across the nation. These facts alone should ensure CRRC be included on all DOD reports.

In March 2020, the Australian Strategic Policy Institute released their report Uyghurs for sale—‘re-education’, forced labour and surveillance beyond Xinjiang (8), examining the Chinese government’s facilitation of the mass transfer of Uyghur and other ethnic minorities from the Xinjiang region to factories across the country. It is estimated that at least 80,000 Uyghurs were transferred out of Xinjiang and sent to work in factories across China between 2017 and 2019, under working conditions that strongly suggest forced labor. These factories are in the supply chains of popular global brands in technology, clothing, and automotive sectors. Companies named in the report include Apple, BMW, Gap, Huawei, and concerning to our coalition—CRRC.

This is not the first time CRRC has been called out by independent research for human rights violations and questionable labor sourcing. In November 2019, NBC News Exclusive aired a report regarding the thousands of children that are exploited in Madagascar mining for mica. (9) These children—as young as four years old—lack access to clean water, proper health care,and education, and suffer from a myriad of medical conditions due to mining mica. Mica is a mineral that is both tough and elastic, even in very high temperatures. It is commonly used in manufacturing across the globe, such as in trains, planes, electronics, and automobile parts. This news story highlights that CRRC uses mica, sourced in Madagascar by children, for its rail cars. In fact, NBC interviewed CRRC executives inside its Springfield, MA facility as part of the story. The CRRC executive was not able to answer direct questions regarding the source of parts for the facility he was managing; and in the years since that report was made public, the company has not addressed the issue.

The Rail Security Alliance has worked closely with the Biden Administration and previous administrations, and with bipartisan leaders in Congress, to help assess these threats as they have recently emerged. We appreciate actions already taken by previous administrations to stem these threats, including the imposition of Section 301 tariffs on rail car parts and the U.S. Trade Representative’s (USTR) investigations into China’s technology transfer and intellectual property theft in this sector.

Congress has also responded to CRRC’s aggressive, predatory tactics by enacting the Transit Infrastructure Vehicle Security Act (TIVSA) as part of the National Defense Authorization Act on December 19, 2019. (10) This act would prohibit the Federal Transit Administration from funding transit projects with taxpayer dollars to transit agencies that award contracts to CRRC.

While important, these steps are not enough to put an end to CRRC’s goal of dominating our rail sector and imperiling our manufacturing and national security interests tied to this industry. As Congress and the Administration continue to establish policies to combat the threat of Chinese state-owned enterprises (SOEs) in our manufacturing sector, we urge DoD to keep CRRC on the list of companies with ties to China’s PLA. Keeping CRRC on the list would provide further evidence on why policies to protect critical industries, such as rail, from Chinese dominance need to be enacted.

As you are aware, the threat from the People’s Republic of China has only been made clearer during the COVID-19 pandemic, which has hobbled industries around the globe and made businesses and even nations more beholden to China; this extends to the companies that expand the reach of its government and its military like CRRC. As one recent report stated, “Beijing wants to outmaneuver U.S. companies and become the beneficiary of COVID-19 relief –to ensure that Chinese enterprises, state-owned and ostensibly private, are the ones to build the new wave of U.S. infrastructure and manufacture the new wave of materials that COVID-19 stimulus will fund.” (11) The report, which we have included for your reference, highlights China’s efforts to manipulate U.S. stimulus measures during past economic crises, going so far as to say that “Beijing writes that all U.S. politics are local and therefore that the U.S. cannot defend itself from Chinese incursions.” As the U.S. tries to implement policies to protect against Chinese dominance, the CCP helps its companies circumvent those regulations. Combating the threat of Chinese state-owned-enterprises in America’s rail sector will need to take a multi-faceted approach, with agencies and Congress doing what is in their power to ensure we have a robust rail manufacturing sector coming out of the COVID-19 pandemic.

The Rail Security Alliance appreciates the work done by DoD to combat Chinese influence, and we urge continued attention to these threats, including ensuring CRRC remains on the annual list of companies with ties to China’s military. We stand ready to support these efforts, for the sake of the American rail industry and those military, commercial and workforce interests that rely on this sector to be free of control from the influence of the Chinese government. As you are continuing to prepare the report for Congress, we are happy to provide resources or more information.

Editor’s Note: This letter contains 11 footnotes/references for the reader, which are included below. There appear to be a couple of errors in the numbering of the notes. The first is that (i) is listed where (4) should be, so this is shown as (4) in the text and the notes. Second, (6) is missing altogether in the text, except there is a (6) showing in the notes. DCL

(11) Horizon Advisory, When The Iron Is Hot: The Chinese Party’s Subversion of US Recovery & Investment, June 2020.https://www.horizonadvisory.org/ccpsubversionreport