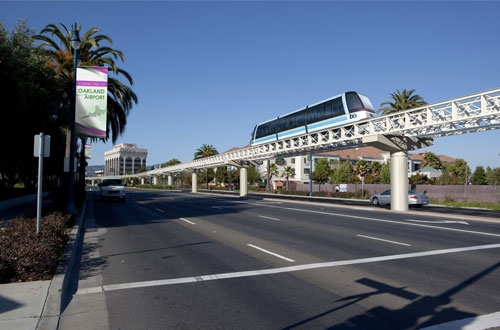 The more than 300-foot long span, comprised of more than 150 tons of steel supported by concrete columns over the highway’s northbound and southbound lanes, allows the cable-propelled system to travel above highway traffic to and from the Coliseum/Oakland Airport BART Station and Oakland International Airport.

The OAC is a 3.2-mile extension of BART from the Coliseum/Oakland Airport BART Station to Oakland International Airport, via an “Automated Guideway Transit (AGT)” system. OAC will replace the AirBART buses and will provide a connection between BART and the airport with driverless trains that travel the alignment in eight minutes and depart every four minutes.The system also includes two new stations at each end of the line, an operations power and maintenance facility and a subway underneath Doolittle Drive.

With the installation, the project is more than 60 percent complete. Construction is scheduled to be complete in late 2013 and after several months of systems testing, OAC will open for service in late 2014.