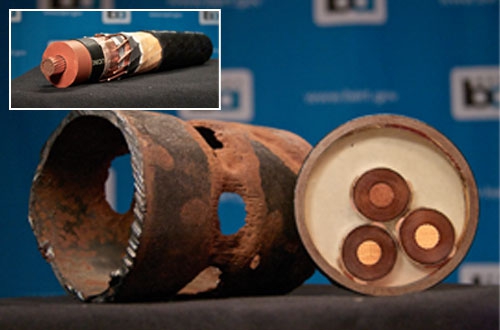 The image above shows the 34.5kV cables encased in nitrogen-filled pipes that are part of BART’s current power system. The inset is the modern cable BART hopes to install.
BART

BART says the project will take some 14 months to complete.

The plan for the new substation is part of the transit system’s Measure RR initiative, a multi-year plan to revamp the infrastructure as the system approaches its 50th birthday in 2022. Roughly one-third of $3.5 billion budget for Measure RR is dedicated to overhauling BART’s all-electric service by upgrading the whole power supply system (conduit, cables (34.5kv), and substations) with modern shielded cabling and new distribution hardware so the power can be properly stepped down and fed into the 1000-volt, electrified third rail.

BART has called for replacing 28 substations under Measure RR. In addition, BART said in late November that it had identified five sites for new, additional substations. The transit system says the improvements will allow it to increase the number of trains it runs through the Transbay Tube from 24 an hour to 30. Preliminary work on the new substations began late last year.