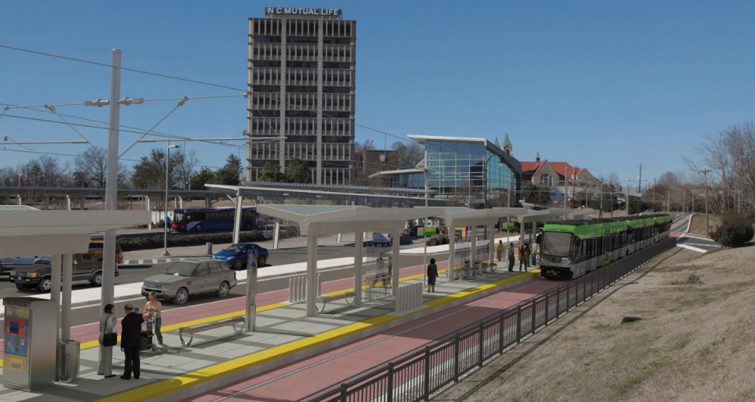 A North Carolina light rail project is a go again after county officials came up with two separate fees and a tax increase to cover a funding shortfall.

But Durham County officials announced Aug. 27 that they plan to cover the added expense with additional revenue from a vehicle registration fee, a car rental fee, and a half-cent transit tax. Proceeds will also fund other transit projects.

The funding change was contained in a letter to the GoTriangle Board of Trustees unanimously approved by the Durham County commissioners Monday night.

A companion letter from Orange County commissioners will be considered at their meeting Sept. 4.

The state’s contribution was expected to total $247 million. But GOP legislators rushed through a budget capping that at $190 million.

GoTriangle – which was hoping to receive a grant from the Federal Transit Administration for half of the project cost – had been asked by the FTA to report by Sept. 7 how it would cover the shortfall.

Durham County had agreed to spend $738 million for the project, and Orange County $149 million.

Earlier this summer, Republicans in the General Assembly rushed through a budget with a provision that all non-state funding for light rail had to be committed before the state would pledge funds. This would have effectively killed the project, since the FTA requires all non-federal funding be in place before awarding New Starts grant of about $1.2 billion.

Local elected officials managed to get the provision rewritten to allow up to $190 million in state money for light rail, on certain deadline conditions. Those include about $1 billion in local funding committed by April 30, 2019, along with ongoing, private fundraising to collect commitments for about $102 million in cash and right-of-way donations.

Also, GoTriangle must secure federal funding by November 30, 2019. The agency plans to submit its final application for federal money by the end of this year, with the aim of securing an agreement by September 2019.

Barring delays, construction will begin in 2020, and the line will open in 2028.