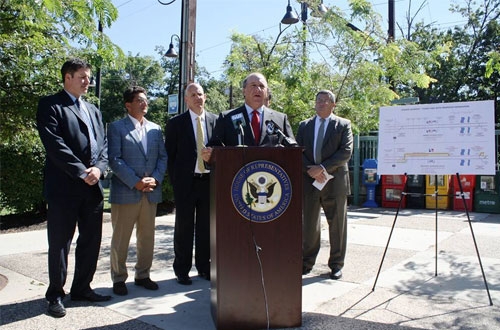 SEPTA’s press conference detailing the TIGER grant that will be used to fund the SEPTA-CSX Separation project along the West Trenton Line.

SEPTA’s grant of $10 million will support the SEPTA-CSX Separation Project, which will improve safety and service on the West Trenton Regional Rail Line. The project has a total estimated cost of approximately $38 million.

This effort, which is a partnership between SEPTA and CSX, will separate passenger and freight rail operations, both of which are experiencing sustained growth, along a six-mile portion of track owned by CSX between the Woodbourne and West Trenton Stations.

Currently, this shared segment of track carries 57 SEPTA trains each day, serving riders on the West Trenton Line. Ridership on the West Trenton Line has increased by more than 60 percent during the past decade, to approximately 12,500 passenger trips on an average weekday, making it one of the most heavily traveled routes in the transit system.

The shared track span also provides a key route to moving goods throughout the Greater Philadelphia region, with more than 20 freight trains passing through daily. It provides access to the Port of Philadelphia, making it critical to the local economy and also has an impact nationally in linking CSX’s north-south network.

The increased activity in both passenger and freight service, however, has created heavy traffic and delays, particularly during rush hour. By upgrading this six-mile stretch, including construction of a new four-mile track on the main portion for passenger trains, SEPTA and CSX will be able to relieve this congestion and provide room for future growth.

There will also be upgrades to existing track and other infrastructure, which will allow for more efficient operations.

“This project is not only critical to SEPTA and CSX, but to the region as a whole,” said SEPTA Board Chairman Pasquale Deon, Sr. “This will significantly enhance a portion of the rail corridor that is vital to our economy, ensuring that commuters have reliable transportation to get to-and-from work and that businesses can send and receive goods efficiently and effectively.”

The project will also clear the way for SEPTA to fully implement Positive Train Control.

Additionally, a $1.4 million TIGER grant was awarded for the upgrade and repair of 42 miles of mainline between Rochester and Ossipee on the New Hampshire Northcoast Railroad.

“New Hampshire Northcoast Railroad from Rochester to Ossipee is an important economic link for Strafford and Carroll counties, connecting the region to the national freight network,” New Hampshire Gov. Maggie Hassan said. “Funds from the TIGER grant will help support critical repairs and upgrades in order to increase the weight limit of rail car shipments and the speeds that trains can travel, as well as to improve safety and reliability. These improvements will assist in our efforts to support growing businesses, attract new industry to the region and help build the foundation for a stronger, more innovative New Hampshire.”