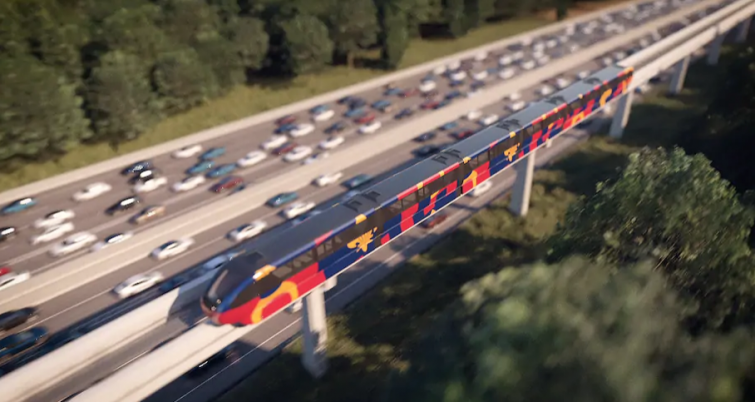 A rendering of the monorail system proposed on Maryland.

A study shows that the construction of a monorail system in Montgomery County, Md., would be useful, but not useful enough to shed traffic off of I-270.

Instead, the line, priced at $4.4 billion, would pull passenger from other transit lines. The route would connect Frederick and the Shady Grove Metro station in Montgomery County, and the 28-mile trip would be complete in about 46 minutes. The study was conducted by the Maryland Department of Transportation.

However, companies in the corridor that the monorail would serve say they need more transit options to attract younger workers.

The study showed that the monorail could serve between 34,000 and 47,000 riders daily, but 10,000 would come from transit systems like the MARC commuter rail and express buses. A little over 10,000 would be new riders, which would reduce traffic less than 1 percent on I-270 and other local roads.

“The ridership has been determined to be a concern due to the decrease in ridership anticipated from the other transit services and the overall lack of reduction of single-occupancy vehicle trips from I-270,” the study said.

Furthermore, the study revealed there would need to be a spike in development around potential monorail station sites and motorists would have to make a behavioral shift to switch to mass transit.

An aggressive construction schedule could have the monorail complete in five years with six stations. Officials still have not come up with a way to finance the project or cover the ongoing operating costs.