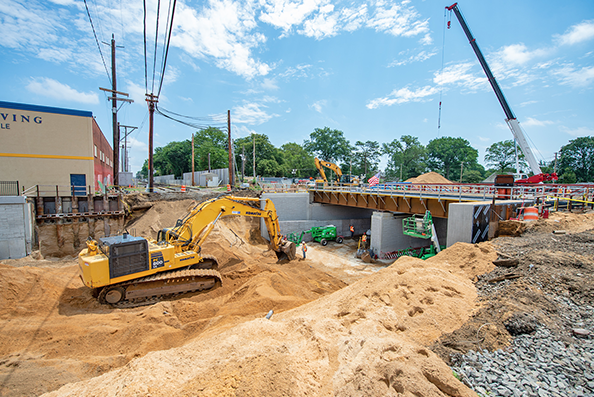 Crews on the LIRR Expansion Project successfully installed a new bridge and underpass tunnel over the weekend.
LIRR

The grade crossing was closed in February and over the past several months crews installed soldier piles, excavated for the undergrade roadway and constructed the new 3,550-ton train bridge and tunnel structure on the south side of the tracks in preparation for the installation.

This past weekend during a main line service outage, crews removed the existing LIRR tracks and systems at New Hyde Park Road to allow for materials supporting the tracks to be excavated. Following excavation, the bridge was pushed into place utilizing a system that included 20 hydraulic jacks to move the structure into place. Each jack has a capacity of 250 tons for a total of 5,000 tons of total jacking force. The jacking system is capable of pushing the bridge a distance of 20 in. with each stroke. After each push of 20 in., the jacking system was reset a total of 30 times to move the 75- by 40-ft bridge 50 ft into its final position.

Taking full advantage of the service outage on the main line crews also demolished the pedestrian bridge at the east end of Mineola station. The bridge will be replaced beginning in late 2021.