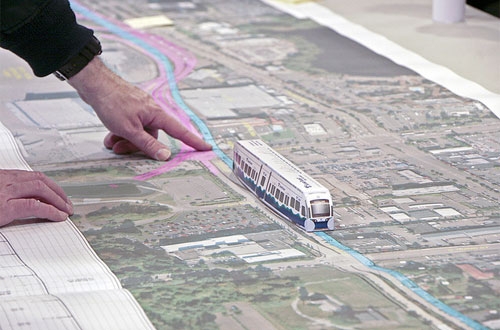 When friends become enemies it is always a messy situation. Sound Transit and Microsoft are starting to sling some mud at each other, and it has ended up in a lawsuit.

Sound Transit needs access to Microsoft land to build light rail from Overlake to Redmond, Wash. At question are some small sections along Highway 520 and easement right for worker access and equipment storage. Tracks and retaining walls need to be constructed along eastbound Highway 520, where Microsoft’s north campus sits. Crews will need to take up space between a parking garage and offices, and there could be noise issues and utility impacts.

Microsoft believes the work is part of a “vast and complex” undertaking, and claims Sound Transit’s plans do not provide enough details. Microsoft attorney Stephen VanDerhoef said, “I have never had a case like this one that involves so many overlapping and distinct fee takes, temporary construction easements, permanent easements and long-term disruption occurring in the heart of a large business campus.”

Sound Transit has been allowed to take some soil samples, but the two sides have not been able to negotiate a price for the land. Sound Transit has offered $10 million for the sections, but Microsoft believes they are worth $27.6 million.

Now there are claims that the project is being delayed, and if the case does not happen until July the finish line could be pushed back 7.5 months and there could be $16.2 million in additional costs. Sound Transit believes this is a worst-case scenario, and says there are several opportunities to still avoid delays. The project is scheduled to be complete in August 2024.

A jury trial is set for May 11 to settle the differences, but if the coronavirus pandemic is still forbidding large gatherings that date could be changed.

Sound Transit says it is continuing to negotiate with Microsoft so the court date can be avoided.