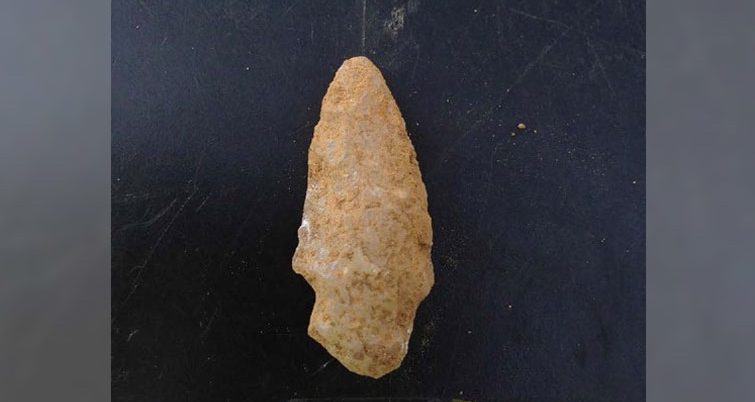 A Lamoka Point found during an archaeological excavation of an ancient fort that was discovered as officials were conducting environmental surveys associated with the Walk Bridge Program. | Photo: Connecticut Department of Transportation

The location is on top of a 3,000-year-old site, indicating that Native American use of this area took place for multiple generations before the arrival of European traders and settlers, ConnDOT said.

The environmental surveys revealed the potential for historically significant sites to be present within the program’s work area, and officials said additional investigative work revealed remnants of the pre-Contact and Contact Period fort.

The term “Contact Period” references the time frame during which when Europeans first began to come in contact with Native Americans, which is generally understood to be between 1500 and 1700.

“This is a highly significant discovery that represents some of the only real information we have on Native Americans in present-day Norwalk,” said Dr. Ross K. Harper, senior historic archaeologist, Archaeological and Historical Services, Inc., the Connecticut-based cultural resources firm completing the archaeological recovery effort.

“Fewer than a half-dozen have been discovered in Connecticut and Long Island Sound combined,” Harper explained. “Were it not for the Department of Transportation and the Walk Bridge Program, we may have lost this important opportunity to deepen our understanding of these people and their role in Connecticut history.”

The fort is believed to have been used primarily for trade between Native Americans and early Dutch settlers somewhere between 1615 and 1640. Officials said the fort eligible for listing on the National Register of Historic Places.

Artifacts uncovered from this time period include wampum, glass and copper beads, stone arrow points, European flint, and iron trade tools. Findings from the pre-Contact period also include an Orient Fishtail point and a Lamoka point. No evidence of human remains or characteristics of a human burial have been found, ConnDOT said.

“This discovery is an exciting development in the Walk Bridge Program,” said James Redeker, Connecticut commissioner of transportation. “We are delighted to make this contribution to the existing body of knowledge surrounding the rich history of our state. As important as the preservation of these historical artifacts is to understanding our past, so is the preservation of our railroads to securing our future. Our railroad system is a vital transportation asset that contributes to the Connecticut shoreline and the City of Norwalk’s status as one of the most sought after places to live, work, and do business in the country.”

After consulting with the Federal Transit Administration, State Historic Preservation Office and federally recognized Native American tribes, the Department of Transportation is set to complete the removal and the site.

Officials said artifacts found at the location will be conserved and analyzed to develop an understanding of what took place at the historic site.

“Although the site will be physically removed, the excavation will preserve what is most important: the story it tells about Native American peoples here,” a statement said.

The area is currently an active construction site, and the surrounding public has been asked to refrain from trespassing at the location both for their own safety and for the preservation of the archaeological site.