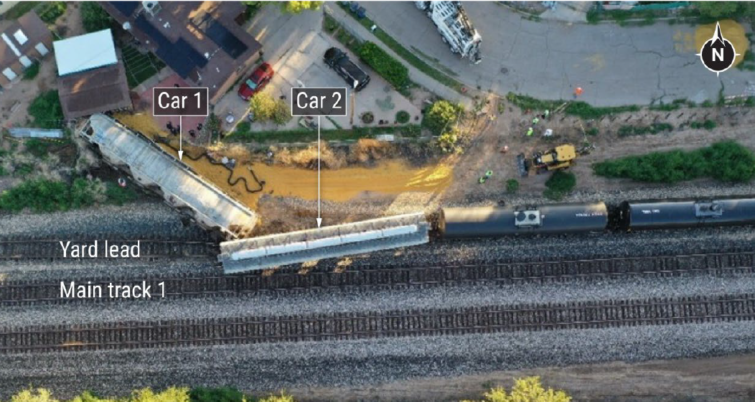 A Union Pacific conductor was killed in August during a reverse movement on the railroad. The NTSB has released the preliminary report on the accident.

The preliminary accident report is reproduced below.

​​This is preliminary information, subject to change, and may contain errors. Any errors in this report will be corrected when the final report has been completed.

On Aug. 29, 2022, about 9:14 p.m. local time, the conductor of Union Pacific Railroad (UP) train, ISIEP-29, was killed when two cars of the train derailed while performing a westward reverse movement near UP’s Alfalfa Yard in El Paso, Texas. The train consisted of two locomotives and 61 cars. The conductor was riding on the lead car of the train during a move from Main Track 1 through Control Point Rosedale onto the yard lead when it encountered a derailing device. The derailing device had been placed on the track to protect Maintenance-of-Way employees installing a switch at the east end of Alfalfa Yard. The first two cars of the lead end of train derailed with the lead car landing on its side and then sliding into a residential property and severing a natural gas line. Conditions were dark, the temperature was 80°F with light wind at the time of the accident.

Parties to the investigation include UP, the Federal Railroad Administration, the Brotherhood of Locomotive Engineers and Trainmen Union, and the International Association of Sheet Metal, Air, Rail and Transportation Workers.