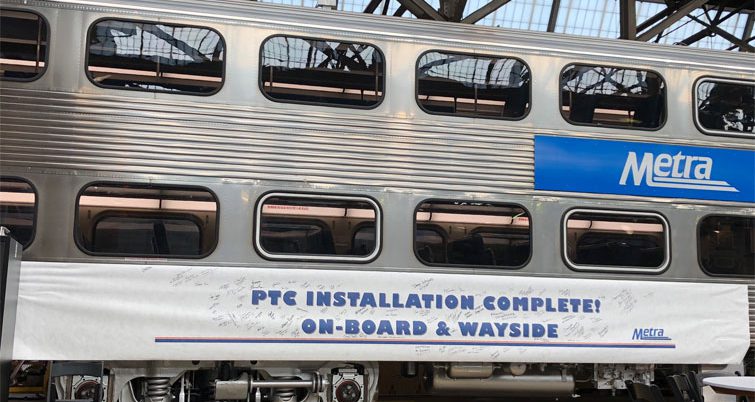 Rep. Dan Lipinski of Illinois’ third District has announced that Metra, the commuter railroad serving the Chicago metropolitan area, will receive more than $2 million from the U.S. Department of Transportation (USDOT) to bolster its implementation of Positive Train Control (PTC) technology.

“This funding is good news for Metra users and every commuter in the Chicago area,” Lipinski said. “Representing a district with a large number of rail lines, I have always made safety a top priority on the Railroad Subcommittee. In 2008, I included language in a bill to create the Rail Safety Technology Grant program to help railroads install life-saving PTC more quickly.  Last Congress, I joined with Rep. Quigley on a bill to reauthorize the grant program so that Metra could get federal help to install this critical technology.”

Lipinski said in a statement that the grant is expected to support Metra’s purchase of onboard PTC equipment for recently purchased locomotives.

Lipinski’s office said he met with Metra and BNSF earlier this month, at which time Metra CEO Jim Derwinski said some delays observed along the BNSF line and other Metra lines were a result of the need to update the railroad’s PTC equipment.

“I’m hopeful this grant money will help alleviate some of the delays and other problems with Metra trains,” Lipinski said. “I will continue to push my colleagues in Congress to consider a comprehensive infrastructure bill before the end of the year that includes additional dollars to help expedite the implementation of PTC both in the region and across the country.”

In September of 2018, Metra celebrated the completed installation of all hardware required for its PTC implementation. Installing all PTC components on the commuter railroad’s trains and communications and signal systems was one of four achievements outlined as requirements for Metra to qualify for an alternative deadline to have PTC fully implemented by Dec. 31, 2020, officials explained in September.

Metra is expected to spend approximately $400 million to install PTC along its system and will pay between $15 million to $20 million in annual operating costs, officials said. About a tenth of the of the costs had already been covered as of September by $43 million in federal PTC grants.

The commuter railroad said it is also preparing to ramp up its interoperability efforts because Metra’s PTC system must be interoperable with 13 other railroads before complete implementation is achieved.