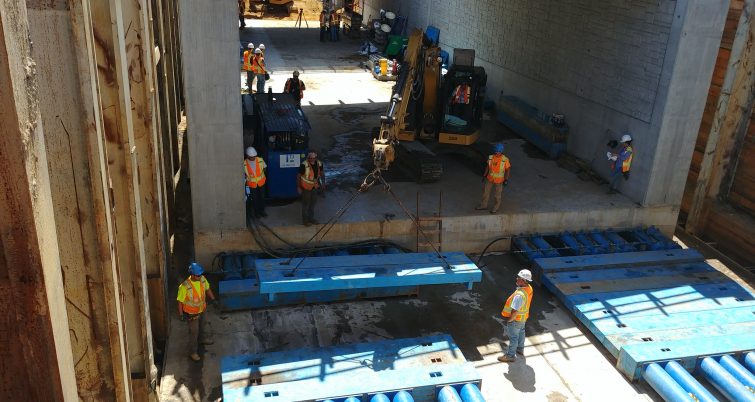 Crews were able to replace and/or work on several bridges during 2020.
LIRR

The Metropolitan Transportation Authority (MTA) ended 2020 with the successful completion of railroad crossing eliminations and station enhancements related to the LIRR Expansion Project, one of the largest transportation infrastructure projects in North America, which will add a third track from Floral Park to Hicksville to reduce train congestion and delays. These milestones, and others, were met ahead of schedule and under budget despite the challenges of a global pandemic.

MTA Construction & Development (C&D) and MTA Long Island Rail Road (LIRR) contractors successfully advanced an impressive array of projects this past year, setting the stage for what MTA C&D expects to be another successful year in 2021–with the remaining railroad crossings to be eliminated, the last of the seven bridges to be replaced, enhanced stations either completed or begun, and more.

“The year 2020 was incredibly challenging, but we kept on schedule–and budget–on a huge range of important projects, like the LIRR Expansion Project (Third Track) and the new East End Gateway to Penn Station,” said Janno Lieber, president of MTA C&D. “Key project elements like the railroad crossing eliminations and station enhancements on Third Track are already delivering benefits for Long Islanders. Capped by the opening of the magnificent new Moynihan Train Hall, 2020 demonstrated the results of Governor Cuomo’s determination to transform LIRR customers’ experience.”

“The challenges we faced in 2020 were unlike anything we’ve ever encountered before, but that didn’t stop our incredible workforce from accomplishing several vital safety and reliability service improvements while simultaneously modernizing our system,” said Phil Eng, president of MTA Long Island Rail Road. “I’m thankful for all the men and women of the LIRR and MTA who helped deliver these substantial improvements that are enhancing service every single ride for those that rely on LIRR today, and for future generations.”

Eliminating railroad grade crossings enhance safety by eliminating the possibility of train/vehicle conflicts. It also enhances quality of life, as trains no longer need to sound their horns, and crossing gate bells are removed. Five railroad crossings were eliminated in 2020.

The School Street undergrade crossing on the border of Westbury and New Cassel features a two-lane roadway with a pedestrian walkway on the east side. Lieutenant Gov. Kathy Hochul, MTA C&D President Janno Lieber and other dignitaries cut the ribbon to open the roadway in November. The bridges carrying the LIRR over the underpasses were constructed on-site and pushed into place during service outages in just one weekend. Service was restored in both instances in time for the Monday morning rush hour commute.

The S. 12th Street railroad crossing in New Hyde Park was permanently closed in October to make way for the construction of an ADA-compliant pedestrian underpass.

Low-hanging bridges have been the site of many accidents over the years as trucks strike the bridges causing structural damage and train delays. Bridge replacements with new height requirements allow trucks to safely pass underneath.

During a main line service outage on the weekend of Sept. 19-20, MTA C&D installed the steel girders over the Meadowbrook Parkway, in Carle Place, that will carry the LIRR’s third track. The bridge, owned by the New York State Department of Transportation, has been in service since 1956 and maintains its current 13-ft-2-in. clearance since commercial traffic such as tall trucks are not permitted on the parkway.

The MTA replaced the 78-year-old Glen Cove Road bridge in Carle Place. Using a method successfully employed at Nassau Boulevard and Cherry Lane among other locations, the new bridge was built on-site and then during a weekend double-track service outage on June 29, the old two-bay bridge was removed and replaced with a new three-bay bridge to accommodate the future third track.

In April, the Plainfield Avenue bridge modification project was completed. The bridge, located in the village of Floral Park and in service since 1958, received a new single-track span to accommodate the additional track with the LIRR Expansion Project.

The Linden Avenue underpass also was completed in April. It is the only pedestrian access to the Floral Park Pool and Recreation Center from the north side of the LIRR main line. It was demolished and reconstructed to accommodate the new third track to be added to the main line.