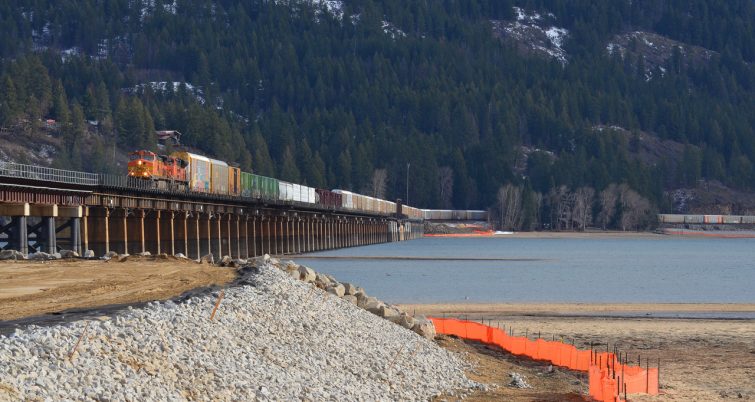 The first signs of physical progress have been made in BNSF Railway’s long-awaited plan to build a second bridge, nearly a mile in length, running parallel to its existing bridge across Lake Pend Oreille near Sandpoint, Idaho. Preliminary grading began in September 2019 on both sides of the lake to prepare the approaches to the new bridge. Within the city of Sandpoint itself, grade work has included the construction of a pedestrian tunnel—paid for by BNSF—which will safely maintain public access through railroad property to a popular beach and lakeside trail.

Ben Wilemon, External Corporate Communications Manager at BNSF, tells Railway Age, “Most of the grading for phase one of the project is complete. There will be grading done to access the sites at various points, but final grading (sub ballast) will not be placed until the bridges are complete.” BNSF’s second bridge over Lake Pend Oreille, plus two smaller bridges within Sandpoint city limits, are key components to the railroad’s Sandpoint Junction Connector project, which will extend BNSF’s mostly doubletracked corridor between Spokane, Wash., and Sandpoint another two miles eastward (or northwestward as it appears on the map) to the junction where BNSF and Montana Rail Link converge.

Having parallel bridges carrying two main lines into Sandpoint will allow BNSF and MRL trains to travel in and out of the busy Spokane-Sandpoint “Funnel” with little or no delay. Expediting the free flow of train traffic should also reduce delays for motorists at local grade crossings. Current operation using the existing single-track bridge frequently requires lower-priority trains to wait their turn on either side of the lake while other trains make their way across. 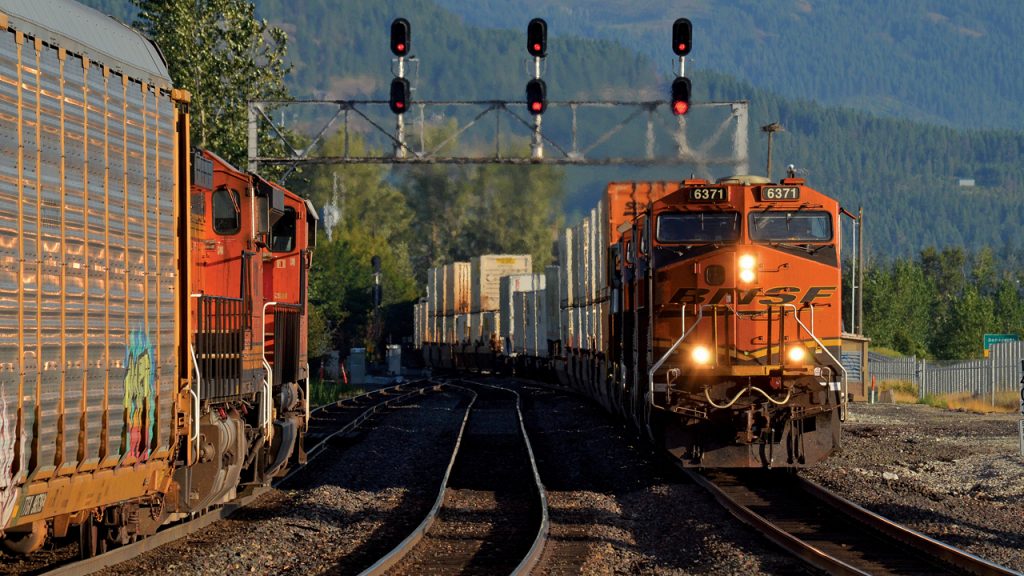 On July 27, 2019, a vehicle train off MRL (left) waited at Sandpoint Jct., Idaho, while a higher-priority BNSF train traversed the single-track route across Lake Pend Oreille, headed toward Chicago with domestic intermodal. A second bridge will make this scene a thing of the past. Photo by Bruce Kelly.

Dual crossovers will be installed between the two main tracks on the Sandpoint end of the main bridges, near Dog Beach. BNSF’s Wilemon says, “We anticipate the bridge contractor will mobilize some equipment to the site in March 2020 and begin some limited work during the lake drawdown period.”

Opponents of the project claim—incorrectly—that a second bridge over Lake Pend Oreille will allow BNSF to double the number of trains it runs through Sandpoint. While BNSF has said that a second bridge would help to accommodate a slight increase in rail-hauled business for the Pacific Northwest, several capacity constraints still exist elsewhere in the region, which limit the number of trains that can actually be routed by way of Sandpoint. BNSF’s primary goal with the Sandpoint Junction Connector and its associated bridges is to alleviate one of the more significant bottlenecks on its Northern Corridor.