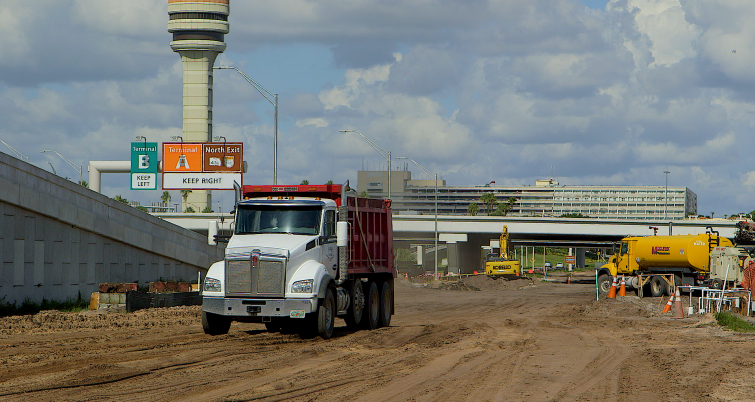 Brightline Trains will make construction history when it builds a rail underpass under S.R. 528 in Brevard County, Fla.

It will mark the first time in North America the innovative box-jacking method will be used under a highway system and the first to do so under live traffic.

The S.R. 528 tunnel, located just west of U.S. 1, will be constructed over a two-week span using box-jacking. The method uses hydraulic jacks to move precast concrete boxes into place, creating a tunnel under the roadway. An anti-drag system will be used when installing the boxes to allow for traffic to continue to travel overtop the work.

The S.R. 528 box-jacking project begins on Sunday, March 14, and will last through Tuesday, March 30. During this time, the highway will be reduced to one lane in each direction and some entrance and exit ramps will be closed to reduce congestion on the highway. Full detours of S.R. 528 will be limited to overnight hours at the start and finish of the project.

“In order to build an underpass under S.R. 528, a busy highway which is a gateway to Florida beaches, we knew we had to come up with a way to minimize the impact on this roadway and the travelling public,” said Michael Cegelis, executive vice president, Development and Construction, for Brightline. “We strive to use the newest technologies to build high-speed rail in America and our general contractor Granite found, investigated, and proposed this box-jacking concept. Box-jacking will enable us to accomplish in 15 days what would otherwise take up to a year using traditional construction methods.”

Granite, who built the concrete box segments, will jack them into place with support from specialty subcontractor Petrucco. The Italy-based Petrucco has successfully completed thousands of box-jacking operations worldwide.

The box-jacking system will use hydraulic jacks to push three precast concrete boxes, each weighing between 3,300 and 4,600 tons under S.R. 528. The installation will progress at approximately 3 ft per hour and will take between 40 and 50 workers working 12-hour shifts to keep the operation running 24/7. The underpass, once constructed, will measure 31 ft high by 43 ft wide, will be the length of a football field and will accommodate two trains side by side. The underpass will allow Brightline to travel between south Florida and central Florida and pass under S.R. 528, eliminating the need for a railroad crossing.

The Petrucco box-jacking method, while commonly used in Europe and around the globe for rail construction, has seen limited use in North America. It was first used in the U.S. on the Long Island Railroad expansion project in New York City. The S.R. 528 project will mark the fifth use of this method in North America and the second on the Brightline high-speed rail project to Orlando. In September 2020, Brightline became the first to use box-jacking outside of the northeast when it built an underpass under Goldenrod Road in just nine days. Traditional underpass construction would have shut down the roadway for nearly a year.

The box-jacking work is part of Brightline’s Orlando extension project which covers 170 miles from West Palm Beach to Orlando International Airport and will connect Miami to Orlando via high-speed rail. Construction of the $2.7 billion project is expected to be completed in late 2022. Railroad construction information also can be found online at https://www.gobrightline.com/railroad-construction.