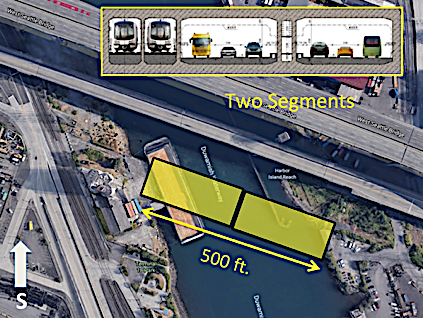 The immersed tube tunnel idea in Seattle looks like it would carry two lanes of light rail transit.

Railway Track & Structures magazine recently ran a web story on Seattle Mayor Jenny Durkan and her plea for Sound Transit to help build a bridge across the Duwamish Waterway. The current span serving traffic is the West Seattle Bridge, which has been closed due to cracking. It may not by repaired until 2022, forcing city officials to look to other options. Sound Transit has a load of money coming its way, and perhaps a vehicle/train/bus bridge could be constructed. That is Durkan’s want, anyway.

I ran across an op-ed tonight on the idea of an immersed tube tunnel as a solution to the damaged West Seattle Bridge. And, yes, the tube would carry light rail traffic. At first, my mind only processed the word “tunnel” and my eyes rolled. Tunnels are nothing but money pits. However, when I came to my senses this idea makes sense. An immersed tube tunnel essentially slides into place … and is far cheaper than a tunnel that relies on tunnel boring machines to make a path. Seattle already made that mistake once when it decided to replace the Alaskan Way Viaduct with a tunnel.

The author of this opinion piece is Bob Ortblad. Ortblad is a retired engineer, and his stance on the tube idea is certainly a bright one. I’m all for it.