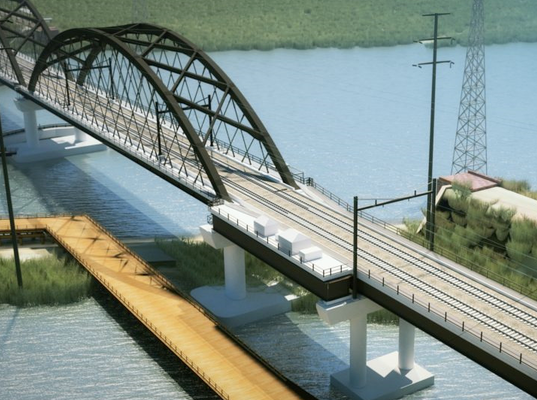 The Federal Transit Administration has awarded a key grant to the Portal North Bridge Project.

Construction of a new Portal North Bridge has taken a big step forward following NJ Transit’s approval of a Full Funding Grant Agreement (FFGA) with the Federal Transit Administration. The new span will replace a 110-year-old swing bridge that has been at the center of train delays due to mechanical failures over the years.

The FFGA is the last stage of the Capital Investment Grant process to fund the $1.8 billion new fixed span that will cross the Hackensack River.

“I’m thrilled by the Board’s decision to green light this agreement, which moves us one step closer to replacing this unreliable, century-old bridge that has threatened to grind the Northeast Corridor to a halt and been a source of untold stress for thousands of riders who rely on it,” said New Jersey Gov. Phil Murphy. “New Jersey has put our skin in the game with more than our fair share of funding, and I look forward to working with the Federal Transit Administration to get this shovel-ready project started.”

NJ Transit, along with Amtrak, will be able to construct the new bridge as well as operate and maintain the structure. Designs for the new Portal North Bridge have been finalized and construction has been fully permitted for years. The new bridge will be high enough to allow marine traffic to pass underneath without requiring any movement from the span. It will take about five years to build the bridge.

The FTA will supply a little over $766 million for the project, with the Federal Highway Administration providing another $57.1 million. New Jersey and Amtrak will fund the remaining amount.