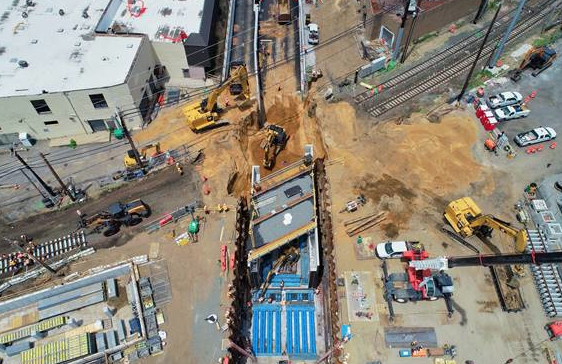 A second bridge will be pushed into place under the main line during the weekend of July 10. The two underpasses are the last to be constructed as part of the LIRR Expansion Project and the only one eliminating two grade crossings at once.

The grade crossings were closed in November and over the past few months crews installed support of excavation (SOE) walls, excavated more than 6,000 cu ft of soil for the undergrade roadway and constructed the 300-ton bridges on the site. The Oyster Bay bridge “U” Structure—including steel, concrete abutments, and floor slabs—weigh nearly 1,500 tons.

During the past weekend, tracks, supporting soil and SOE on the Oyster Bay branch at Willis Avenue were removed. A series of hydraulic jacks then pushed the bridge into place 20 in. at a time before having to be reset. The structure was moved a total of 67 ft into place. LIRR crews then installed electric, communications, and power systems and restored service in time for Monday morning’s peak commute on June 28.

The grade-crossing eliminations will enhance safety, reduce noise and air pollution, and reduce traffic back-ups, as vehicles will no longer need to wait at crossings as trains pass, which can be as much as 35% of the time during rush hours. Warning bells on crossing gates will be eliminated and passing trains will no longer need to sound their horns, enhancing the community’ s quality of life.

The roadway is expected to reopen in fall of 2021.