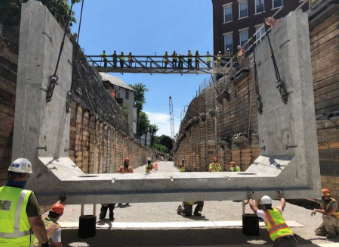 Precast concrete U-walls are being used for a tunnel project in Middlebury, Vt.

A tunnel project that will replace two bridges in Middlebury, Vt., is moving along smoothly. The project started on July 13 and is scheduled to be complete in late September.

Tunnel construction centers around 422 precast concrete U-walls. Top and bottom sections will be set in place with 20 bolt connections that will be sealed with grout, butyl rubber and elastomeric pads.

Prior to the arrival of the precast sections prime contractor Kubricki Construction Corp. excavated 20,000 cu yd of soil. Twelve feet of soil from the rail corridor between the Seymour Street fire station and the Elm Street overpass needed to be removed. Geotextile fabric and crushed stone that serve as the sub-base of the tunnel also were placed.

Precast sections for the 360-ft-long tunnel have been placed on the north end of the tunnel under Main Street.

Once the tube is in place a ballast mat will be used to cover the tunnel to protect the precast sections from the stone ballast that will provide a bed for the rail track. Backfilling operations also will take place.

The tunnel is replacing the Main Street and Merchants Row bridges, which are deteriorating and do not have the vertical clearance needed for double-stack rail cars. The new rail bed will be 3,000 linear feet lower to allow a vertical clearance of 18-21 ft.

The tunnel also will change the rail alignment to reduce sharp curves.