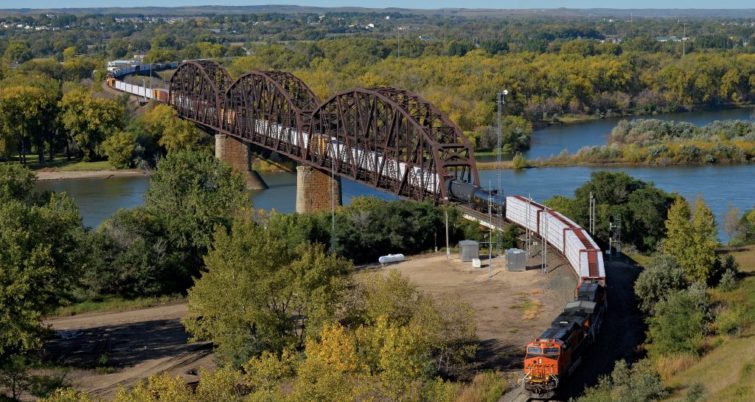 RT&S has reported often on the ongoing debate/battle between BNSF and the Friends of the Rail Bridge, a local preservation group trying to save the old BNSF bridge in the Bismark-Mandin area.

BNSF wants to build a new bridge and remove the old one, while the “Friends” are not opposed to the building of a new bridge, but are adamant about not wanting the old bridge torn down.

Despite the best efforts of the “Friends,” they have not been successful in ensuring the bridge’s future. KFYRTV reported last week that the bridge will likely be removed. The news station cited the Coast Guard’s Final Environmental Impact Statement giving the green light to BNSF to tear down the bridge. RT&S also reported on the EIS last week.

KFYR reported that “This railroad bridge is more than just a way to transport commodities for the state of North Dakota. It’s a muse for several artists and photographers and many look to it as an iconic structure of the Bismarck Mandan area.” The news station also reported that Mark Zimmerman, president of Friends of the Rail Bridge, said “Now Bismarck celebrates its 150th birthday and we are in jeopardy of losing that iconic image of our city in that rail bridge.”

The “Friends” group is holding out hope that the EIS will be challenged and a way will be found to preserve the bridge, but most observers believe this is a long shot. RT&S will continue to report on the bridge situation as long as events warrant.