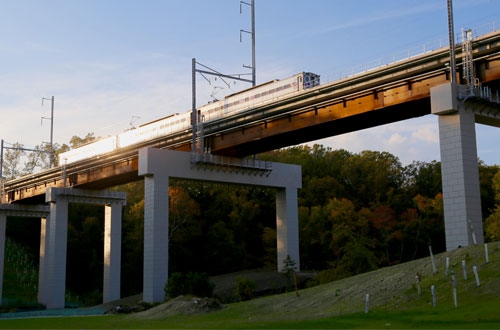 The new viaduct preserves service on SEPTA‘s Media/Elwyn Line, which was in danger of ending less than three years ago due to a lack of capital to fund critical repairs to the structure. Officials credited the dependable transportation funding made possible by Pennsylvania’s Act 89 with providing the needed capital to pay for repairs to the viaduct.

“The completion of the Crum Creek Viaduct Replacement Project is an important milestone for SEPTA,” SEPTA Board Chairman Pasquale T. Deon, Sr., said. “Thanks to dedicated state funding from Act 89, we were able to address a critical need and continue to advance improvements for our customers.”

The original Crum Creek Viaduct dated to 1895 and was acquired by SEPTA from Conrail in 1983. Thirty years after the acquisition, the reached the end of its useful life and required replacement to ensure safe and efficient rail service for nearly 11,000 riders who rely on the Media/Elwyn Line each day.

“Less than three years ago, SEPTA was faced with the possibility of discontinuing Media/Elwyn Line service due to a lack of capital funding to address our critical infrastructure needs along this line,” SEPTA General Manager Jeffrey Knueppel said. “With funding made possible by Act 89, we were able to address critical infrastructure projects on this line, create and support jobs and ensure that this major transportation artery will continue to serve the Delaware County community and the region.”

Act 89 was passed in November 2013 to provide a stable source of funding for transportation improvements statewide, such as infrastructure and replacement of aging vehicles. With Act 89 in place, SEPTA has launched dozens of long-needed capital improvement projects throughout the transit system and across all modes of travel and the authority’s “Rebuilding the System” initiative will allow SEPTA to rehabilitate or replace bridges, replace critical power systems and design and procure new vehicles during the next two decades. The $89.9 million Crum Creek Viaduct replacement was part of this initiative.

Several other improvements were made along the Media/Elwyn Line with Act 89 funds, including extensive overhauls to the century old Cobbs Creek, Darby Creek and Ridley Creek Viaducts and slope stabilization construction that included rock scaling and installation of retaining walls to secure the railroad embankment at the Media Station. SEPTA forces are replacing the catenary system along the Media/Elwyn Line and modernization upgrades to the Lenni and Morton substations were also completed.

“While the viaduct was being replaced during the eleven week summer outage on the Media/Elwyn Line, SEPTA was able to perform a significant amount of critical infrastructure improvements and system maintenance, thus reducing future inconveniences to our riders,” said Robert Lund, SEPTA assistant general manager of Engineering, Maintenance and Construction. “The cooperation and understanding of the affected communities, the public and our riders played a key role in the success of the project.”

The new Crum Creek Viaduct is a 735-foot long steel and concrete structure comprised of five long spans, four piers and two abutments that replaced 17 simply supported steel spans. New bridge abutments were constructed in front of existing abutments and the new superstructure was slid into alignment halfway through the 11-week replacement project. The new bridge is designed for a 100-year lifespan.

During the commemoration ceremony, officials unveiled a plaque to commemorate the completion of the project. The sign is prominently mounted on a bridge column above the Crum Creek.

Following the return of Regional Rail service in September, crews immediately began work to restore the site. Thus far, crews have reopened the Leiper-Smedley trail and public access to trails below the Crum Creek Viaduct. Working closely with Swarthmore College and Scott Arboretum, the eastern and western slopes have been graded, seeded and planted with more than 5,000 trees and bushes. Crumhenge, an area located adjacent to the viaduct where unique stone slabs were located for generations, had to be removed during construction. The Crumhenge area was also laid out and re-installed. Wetland restoration work is ongoing.