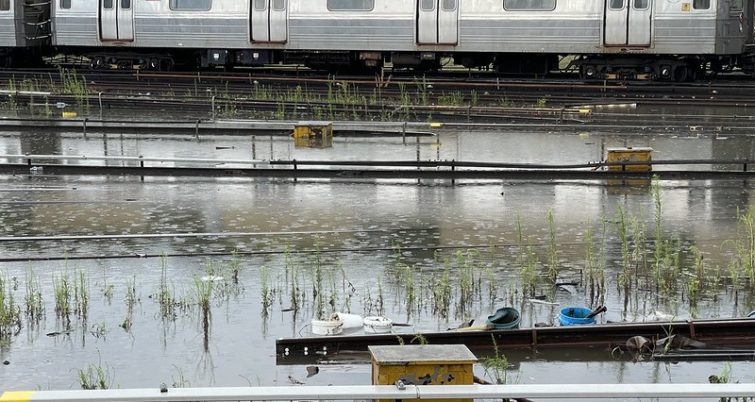 Hundreds of Metropolitan Transportation Authority (MTA) frontline workers were out in the system on July 18 responding to heavy rainfall during the rush hour commute.

Crews from NYC Transit and Metro-North Railroad worked through the night, removing downed trees and clearing tracks of high water to ensure the following morning’s commute would run smoothly.

“Flash flood events are a relatively new hurdle, and NYC Transit responded by pumping thousands of gallons of water from the system,” said NYC Transit President Richard Davey. “I want to thank the whole Subways team for acting quickly; extreme weather events are never easy, but they kept service disruptions to a minimum with their efforts.”

“Yesterday’s heavy rainfall disrupted service throughout Metro-North territory, especially during the evening rush, and as they always do, Metro-North employees stepped up,” said Metro-North Railroad President and LIRR Interim President Catherine Rinaldi. “It is thanks to their diligent response that we were able to restore service in a timely fashion and be set up for a normal morning commute. Many thanks to our customers for their patience as we responded to yesterday’s challenging conditions.”

Subway service in Washington Heights and the Bronx was affected by flooding conditions from a substantial amount of water in a short time, which caused a suspension on the A line. On the 5 line service was interrupted due to a downed tree just north of the Gun Hill Road station. Crews in the Concourse Yard, which affects B and D service, acted quickly to preserve switches after seeing water enter the yard.

Metro-North crews were deployed across the Hudson, Harlem, and New Haven Lines to respond to high-water conditions in the Bronx and Westchester County that affected service into Grand Central Terminal. On the Upper Harlem Line, crews worked to remove a downed tree across the tracks near Croton Falls that suspended service between Goldens Bridge and Southeast in the early afternoon. A downed tree also caused a temporary suspension of service on the New Canaan Branch.

Normal service was fully restored in time for the morning commute, although trains on the 1 subway line bypassed 181 Street station in Washington Heights July 19 due to an elevator outage caused by flash flooding from the torrential rain. Read more articles on track maintenance.