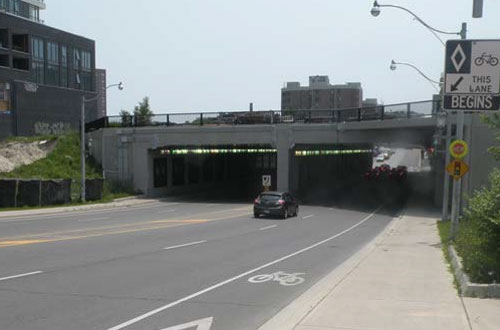 Metrolinx will widen the north side of the Dufferin Street Bridge to support future two-way, electrified GO service.
Metrolinx

With funding from the Moving Ontario Forward plan, Metrolinx plans to expand the bridge at Queen St. W. in Toronto to make way for the additional track needed for the Barrie GO corridor outlined in the GO RER program.

GO RER aims to deliver faster, more frequent service on the GO Transit rail network, which is expected to serve as the community’s foundation for a new rapid transit system. GO Transit rail network will have electrification installed on core segments, including the Union-Pearson (UP) Express. The service upgrades are expected to better facilitate Toronto’s SmartTrack plan, as well.

Officials say the improvements to the bridge are part of the final phase of the original jog-elimination project the City of Toronto completed in 2010.

The Ontario-based company EllisDon was awarded the bridge expansion contract valued at more than $6.4 million. Upgrades are set for completion within one year.

Metrolinx has also partnered with the City of Toronto to extend the West Toronto Rail path multi-use trail along the existing rail corridor, connecting pedestrians from Dupont St. to just east of Dufferin St. in the West Queen West community.

“Metrolinx is pleased to work with the City of Toronto on this expansion project and is committed to working with the West Queen West community on [the] improvements,” said Bruce McCuaig, president and CEO of Metrolinx.

The rail path is also set to connect to the future Dufferin-Peel Park being built by the City of Toronto.

“The improvements to the Dufferin St. Bridge show our commitment to implement much needed rapid transit infrastructure in the [Greater Toronto Hamilton Area],” said Steven Del Duca, Ontario minister of transportation. “Rapid transit expansion is all about giving people more transit options and making it as easy as possible for people to choose transit first. This is proof of our government’s plan in action. We are committed to providing accessible, modern transit infrastructure that will help manage congestion, reduce commute times, create jobs and improve the quality of life for Ontarians.”

Some other key facts about the project include the following: