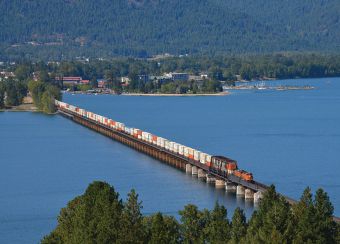 Preparation for a long-anticipated second bridge across Lake Pend Oreille at Sandpoint, Idaho, has been given the go-ahead by BNSF Railway.

Stretching roughly 3/4-mile in length, the new bridge will stand parallel to an existing single-track bridge built in 1904. By double-tracking its crossing of the lake, BNSF will alleviate a chokepoint where BNSF and Montana Rail Link main lines converge at the east end of what’s often referred to as the Spokane-Sandpoint “Funnel.” It’s a vital component in BNSF’s Northern Corridor connecting Chicago, Texas, and the Midwest with cities and seaports in the Pacific Northwest.

BNSF initially announced in 2014 its intention to add a second bridge, but the project was put on hold the following year due to declining freight traffic. Traffic surged in 2016 on the export grain harvest, along with increases in other commodity groups. The current single-track bridge handles 50 to 60 trains per day. That figure can swell to nearly 70 trains per day during the end-of-year peak traffic season.

West of the existing bridge, BNSF’s route toward Spokane largely comprises two main tracks. East of the bridge, BNSF’s Kootenai River Subdivision into northern Montana and MRL’s 4th Sub into southern Montana are mostly single track with intermittent sidings or short segments of two main tracks. When trains from two or more of these lines approach the bridge simultaneously, the higher-priority train gets to cross first.

Grain, coal, and manifest trains off of MRL are often delayed at Sandpoint Junction because the higher percentage of the area’s traffic, including the vast majority of time-sensitive intermodals, travel via BNSF’s Kootenai River Sub. Adding a second bridge over Lake Pend Oreille should help resolve that. And with BNSF installing approximately one mile of second main track between the east end of the new bridge and Sandpoint Junction (requiring an additional bridge over the mouth of Sand Creek), BNSF and MRL trains will move to and from their respective routes more freely.

Having a second bridge in service over Lake Pend Oreille would also allow BNSF to perform periodic maintenance on its existing bridge with minimal impact to traffic flow. In 2008, at the bridge’s railroad east (geographically northwest) end, BNSF replaced 12 of the existing concrete piers with steel piers. In 2009, the same was done to 16 piers at the railroad west (southeast) end. Both projects included installation of new deck spans. Additional work was performed on the bridge as recently as 2016.

Lake Pend Oreille ranks as America’s fifth-deepest lake, at a maximum depth of more than 1,100 feet and nearly 95,000 acres of surface area. During World War II, the Navy operated a training center near the lake’s south end. Today, the Navy’s Acoustic Research Detachment uses the lake to test sonar-evading technology on scaled-down submarines and surface vessels.

Where BNSF crosses Lake Pend Oreille, near its outlet into the Pend Oreille River, water depth is only in the 10- to 20-foot range, varying seasonally. Predecessor Northern Pacific Railway initially crossed the lake on a mile-long wooden trestle built in the 1880s. Two decades later, NP replaced it with the steel-on-concrete bridge that’s in service today. Those concrete piers have stood on timber pilings driven roughly 50 feet into the lakebed. NP later refitted several of the piers to have longer steel piles beneath them. The new piers, which BNSF installed during 2008-09, are supported by steel piles driven more than 100 feet below the lakebed.

BNSF plans to drive two test piles at the site and perform load testing in May and June. Beyond that, BNSF said the project must still go through the appropriate permitting and review process before moving forward. No construction is scheduled for this year.