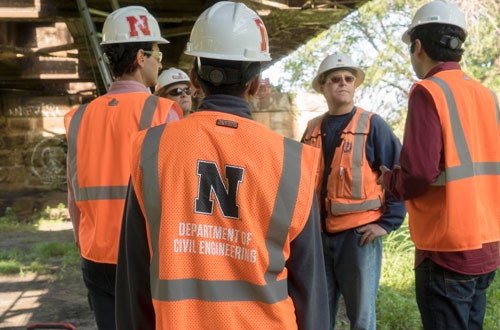 Union Pacific is incorporating "smart monitoring," a technique the railroad says has the potential to revolutionize how the railroad's 18,000 bridges are inspected.

The Class 1 is developing the method with the help of three partners, the University of Nebraska-Lincoln, University of Michigan and SENSR Monitoring Technologies and outlines the use of this technique in an Inside Track post on its website.

Union Pacific inspects roughly 95 percent of its bridges twice annually and explains that bridges with no known defects that are less than 10 years old are inspected once per year.

“We want to know about potential problems between regular inspections, and if there’s a way to detect issues we want to take advantage of that,” said Union Pacific’s Director of Bridge Maintenance Todd Martindale.

The railroad hopes its partners will help it reach the goal of developing an “easily deployable, cost-effective solution to supplement in-person inspections, which carefully examine bridge components for cracks or other defects.”

Researchers from the University of Nebraska are utilizing a 1908 bridge in Columbus, Neb., to install sensors to collect data from steel bridge members. According to UP, the team first installed the sensors on specific bridge components and, after testing, created an analytical bridge model, which serves as the baseline, allowing them to revisit the site and continue collecting data.

UP says the University of Michigan is working on a similar project, partially funded by a U.S. Department of Transportation grant. Students set up strain gauges on two UP bridges near Memphis, Tenn. The devices send data through a wireless network back to the university, where researchers collect and analyze it. They’re focused on how loads, such as the weight of a train or wind, impact bridge components and cause fatigue.

The Class 1 says researchers are incorporating train network influences, such as traffic volume, car weight and alternative routes, as well as bridge analysis data into a newly designed decision-making tool bridge owners can use to manage bridge work.

Union Pacific is working with SENSR Monitoring Technologies to detect movement or impact to a bridge pier – the support structure underneath the bridge deck – such as a strike from a barge or vehicle. SENSR’s technology is operational on seven UP bridges (soon to be 10) and sends an alert if the structure shows an abnormality.

UP notes that while each product is at a different stage, all show promise for the future of smart bridge monitoring.

“The theory is a bridge should have the same response every time a train passes; if it doesn’t we need to look for a potential defect,” Martindale said.

For more on UP’s efforts regarding smart monitoring, visit Inside Track.