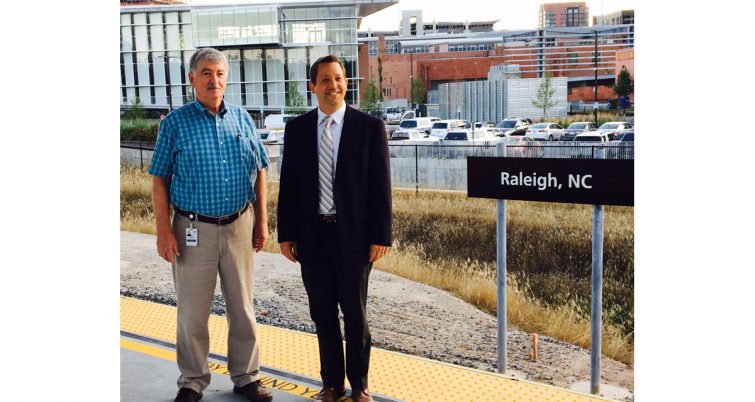 Train travel has eased up for commuters in Raleigh, N.C., with the July 10 kickoff of service from Union Station.

“The start of passenger service at Union Station is important not only for those living in Raleigh, but for people living throughout our region,” said Raleigh Mayor Nancy McFarlane. “Having passenger service in the heart of downtown will make it easier for people to commute from the other communities in our region – on a daily basis for work, to enjoy a concert or festival, or to spend a weekend. It gives Raleigh residents another option when they visit other regions as well.”

The North Carolina Department of Transportation (NCDOT) played a key role in developing the station, officials said, stating that the department contributed more than $11 million in state funding as well as providing technical assistance and project management support.

“It took strong partnership on all levels – local, state, federal and the private sector to get us here. I want to thank everyone who was involved with this very important project,” said Julie White, NCDOT’s deputy secretary for multi-modal transportation. “As the demographics of our state change and our population continues growing, demand for rail travel and freight movement is also increasing. This new station plays a key role in responding to that demand.”

Some notable facility highlights include the 26,000-square-foot building, which provides 9,200 square feet of passenger waiting and amenity areas.

The station also features a new 920-foot-long center platform with level-boarding in order to provide improved accessibility. Officials say this is the first such high-level platform in the state.

“Freight trains can now bypass the station without delays as the newly built tracks serve only passenger rail,” NCDOT said.