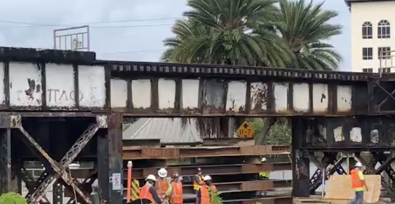 A cement mixer struck a railroad bridge in downtown Melbourne, Fla., on June 2.

If it were all turned around, the entire country would have been tuned into Melbourne, Fla., on June 2.

A freight train pulling chemicals on Florida East Coast Railway tracks was able to avoid disaster when a cement mixer struck a railroad bridge in downtown Melbourne. The conductor of the train saw the accident about a mile before the crossing and the train was able to come to a slow stop where a girder holding tracks going in the opposite direction was damaged. If the train were on the other side of the bridge it most likely would have derailed.

The strike happened around 6 a.m. on June 2, and workers were still repairing the span the next day. The Crane Creek trestle bridge dates back to the 1920s, and has the shortest vertical clearance in Brevard County. Witnesses believe the cement mixer driver was not familiar with the area.

A wheel loader was moving large steel girders beneath the bridge yesterday afternoon. Damaged girders will have to be cut and removed.

Crews were working alongside the trestle bridge building the first of two bridges needed for Brightline’s Orlando-to-South Florida high-speed rail route. No damage or injuries were reported on that work site.

RT&S will provide more information if and when it becomes available.