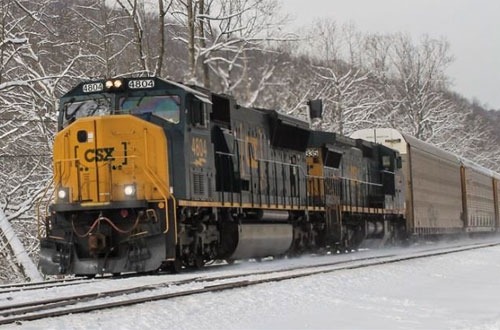 CSX plans a 2018 capital program of $1.6 billion as it continues to strive toward greater capital efficiencies as part of its implementation of precision scheduled railroading.

“There is no turning back,” CSX CEO Jim Foote said on the Class 1’s 2017 Q4 earnings call. “I am committed to follow through on implementing the scheduled railroad business model at CSX.”

Foote said that while the capex number is down significantly from 2017, it is where Hunter Harrison directed the railroad to be prior to his death in December 2017.

“I am committed to investing and maintaining a safe and reliable railroad. As we become more efficient, we are able to achieve more with each dollar we spend,” said Foote.

The railroad plans a marked reduction in rolling stock purchases for the foreseeable future and will focus $1.4 billion on core capital with $200 million for Positive Train Control (PTC).

Frank Lonegro, chief financial officer for CSX, said during the earnings call that half of the PTC footprint is currently operational, with the railroad scheduled to be hardware-compliant by the end of 2018. He explained that PTC will be implemented on more than half of the subdivisions requiring it by the end of the year and the railroad is on track to hit the final 2020 deadline for the technology.

Regarding the reduction in CSX’s planned capital program, Lonegro explained that the railroad is cutting in the right places, offering up the example that the $2.7 billion 2016 capital program included $602 million in engine and freight car purchases, which do not need to be duplicated.

Foote added that CSX does not need to spend money on investments previously made into its infrastructure unless there is a compelling reason to do so.