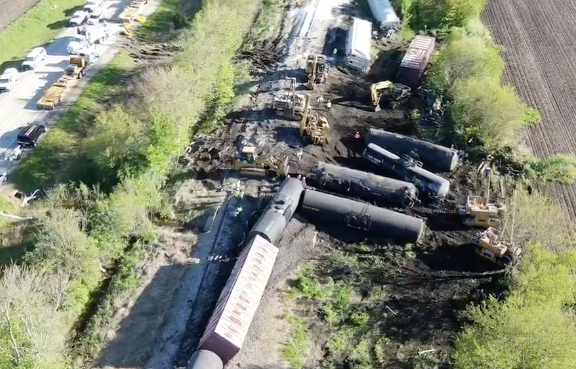 Excavators and dozers were at the scene of the Canadian National derailment in Illinois.

A Canadian National train derailment in Pesotum, Ill., has taken up to 48 hours to clear, and damage to the track could take weeks to repair.

Eight to 10 rail cars came off the track at around 7:45 p.m. on May 11. Nobody was hurt, but hazmat crews were called to the scene. Officials said no chemicals were spilled.

Pesotum Village President Joyce Ragle said roads were blocked until the early morning hours of May 13. Railroad crossings will need to be fixed, and that could take a number of weeks. Dozers and excavators were working the scene in an effort to clean up the accident. Cranes also were used to set cars back on the track.

Crossings from county roads 200 North to 500 North were closed, as well as Rte. 45. Residents on the west side of Pesotum could only access Rte. 45 from Madison Street, which took motorists to I-57. Residents on the east side had to use East Adams Street to leave Pesotum.

No word yet on the cause of the derailment. RT&S will provide an update to this story when and if they become available.