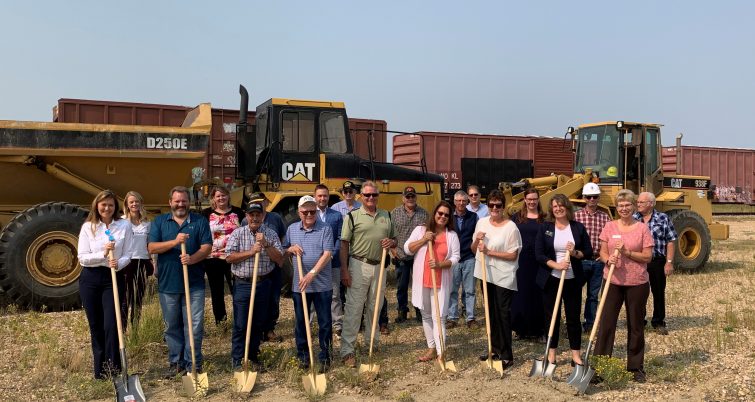 Officials gather for a groundbreaking event of railyard expansion in South Dakota.

A groundbreaking ceremony was held recently in Belle Fourche, S.D., in honor of its newly planned railway expansion.

Dozens gathered to take in the historic event that will create a more extensive transloading facility to serve the area and beyond.

The northern South Dakota city with a population of approximately 5,000 currently has an up to 27-car railyard. Once complete, Belle Fourche’s railyard will be able to accommodate up to 90 cars. Two additional tracks with four turnouts also will be added.

The project will triple the rail capacity at the industrial park and create the largest storage facility on the Rapid City Pierre & Eastern (RCP&E) railroad’s short line. The RCP&E operates rail service through Belle Fourche and on to points in Wyoming, Nebraska and Minnesota. They began operation in 2014 when parent company Genesee & Wyoming (G&W) purchased it from the Dakota, Minnesota & Eastern. G&W, headquartered in Connecticut, is the largest holder of short line railroads in the U.S. and the RCP&E, at 750 miles, is the longest rail line on the system.

“The ability to have more capacity and handle unit-train-type volumes makes this an extremely strategic location for us and I think for the Belle Fourche community as well,” Boehme said. “After the expansion is complete this facility will hold 90 cars at any given time. Our railroad offers five-day-a-week service so essentially you could rotate through 90 cars five days a week. So you’re looking at 450 cars a week that could be handled through this facility, which equates to upwards of 1,500 truckloads. It will be largest transload facility on the system. It’s a huge market for us.”

Hollie Stalder, executive director of the Belle Fourche Development Corporation, said, “It’s pretty exciting to be here after three years of nurturing the project along. It’s going to mean good business, new jobs and expansion of services in the industrial park which is what we’re all about.”

Dirt work has begun and should be completed in October. An estimated project completion date will be mid-July 2022. The $2.4 million project is funded primarily by a Federal Rail Administration (FRA) grant which was given on an 80/20 match basis. BFDC needed to secure 20% of the amount, or $480,000, to get the grant. Half of that amount was funded by a South Dakota Local Infrastructure Improvement Project grant through the Governor’s Office of Economic Development. The remaining $240,000 was split between the city of Belle Fourche and Butte County.