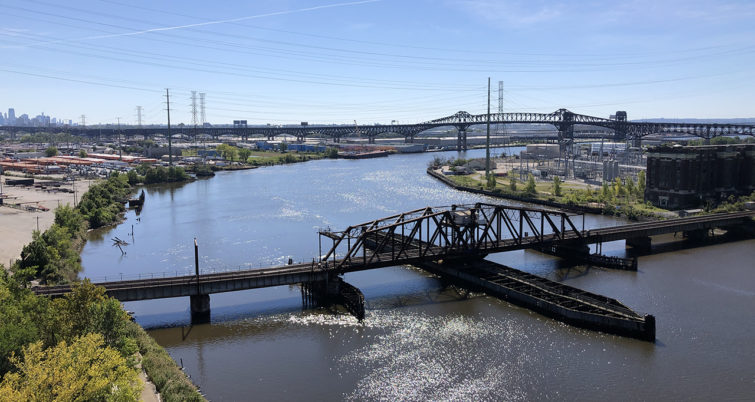 Conrail Shared Assets executives recently led a tour of the construction site of the Point-No-Point Bridge replacement project in Kearny, N.J. for staff members of New Jersey’s U.S. Senate delegation. The purpose was “to demonstrate the vital role the bridge plays in the region’s economy,” Conrail said.

Point-No-Point Bridge, opened in 1901, crosses the Passaic River between Newark and Kearny, N.J. in the New Jersey Meadowlands. The swing bridge is the fourth from the river’s mouth at Newark Bay and is 2.6 miles upstream from it. A camelback through truss bridge, it is owned by Conrail as part of its North Jersey Shared Assets and carries the Passaic and Harsimus Line used by CSX Transportation and Norfolk Southern. CSX’s River Subdivision accesses the line via Marion Junction.

A crossing of the Passaic River at Point-No-Point was originally built by the Pennsylvania Railroad (PRR) in the early 1890s to bypass its main line and shorten the distance to its rail yard at Harsimus Cove. At the time, the PRR crossed the river at the Centre Street Bridge (no longer in existence) near its Newark station, at the site of today’s New Jersey Performing Arts Center. The new Pennsylvania Cut-Off diverged from the line (now today’s Northeast Corridor) at Waverly Yard, crossed the Newark Ironbound section and the Passaic River to the Kearny Meadows and then crossed the Hackensack River on the Harsimus Branch Lift Bridge. It rejoined the main line at the Bergen Hill Cut, but diverged again using the Harsimus Stem Embankment to reach the PRR’s freight yards on the Hudson River waterfront north of its passenger and ferry terminal at Exchange Place in Jersey City, which was closed and torn down in 1962. The PRR also used the Lehigh Valley Railroad Bridge to reach its car float operations at Greenville Yard on Upper New York Bay.