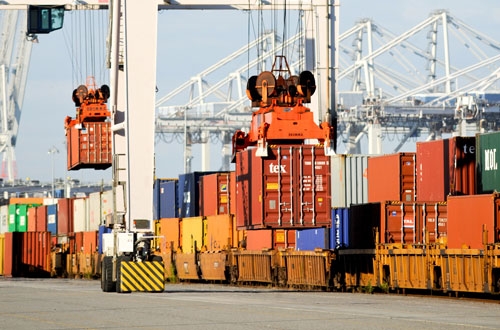 The Port of Long Beach is moving forward with an $870 million project that will streamline rail operations.
Georgia Ports Authority/Stephen P. Morton

The Port of Long Beach, one of the greenest ports in the world, has selected HDR to perform the final design as it moves ahead with its $870 million effort to streamline rail operations and reduce bottlenecks at the second-busiest container port in the U.S.

The Pier B On-Dock Rail Support Facility Project will expand the port’s capability for loading shipping containers directly on rail cars instead of being loaded on trucks for short-haul trips. The expansion and reconfiguration of the existing Pier B rail yard will create a staging area for loading freight trains nearly 2 miles long, eliminating thousands of local truck trips.

“This is visionary. This port is taking the lead in rail,” Port Executive Director Mario Cordero said in his State of the Port address in January. “The delivery of containers to and from ships by train is the most sustainable and efficient way to move cargo in and out of the port. Each train eliminates as many as 750 truck trips, speeding the flow of goods and cutting traffic on roadways. Train is a big part of our green future.”

The City of Long Beach Board of Harbor Commissioners last month approved the selection of HDR to lead design for the project, as well as site investigations, traffic studies, structural analyses, lighting analyses, program sequencing and more. The selection marks a major milestone for a project that has been in the works for years.

The work continues HDR’s history of improving efficiency in the area. Earlier this decade, the company delivered the award-winning Colton Crossing project about 70 miles east of the port, which effectively removed the biggest rail network chokepoint in the nation. The port project will continue that work, creating one of the most efficient, modernized rail facilities in the nation at its origin.

HDR will work with subconsultant Moffatt & Nichol on the Pier B project, scheduled to be completed in three phases, with the first phase expected to be complete by 2024.

“This is a game-changer for the port,” said HDR’s Tom Kim, senior vice president and transportation manager for southern California. “We have been working with the port a long time on preparation for this critical project, and we’re excited to see it all come together.”