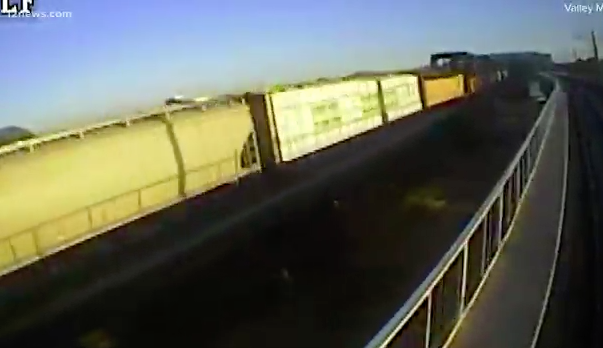 New video from Valley Metro provides some evidence as to the cause of the train derailment in Tempe, Ariz., a year ago.
Valley Metro via NBC 12 News

New video of Tempe derailment may hold clues to the cause of the accident.

The clip is from Valley Metro and shows an angle from light-rail cars passing the accident. Union Pacific railcars can be seen leaning off the track as they start crossing the Tempe bridge. After a spark, the railcars fall with the bridge.

According to NTSB interviews, the conductor and engineer were onboard at the front of the train, and that portion had already crossed the bridge. The train was rounding a corner when the emergency brake system was activated. The NTSB recently released a public docket consisting of 1,300 pages.

Records show a wide gauge may have caused the derailment. One month before the Union Pacific derailment, another train fell off the tracks at the same spot.