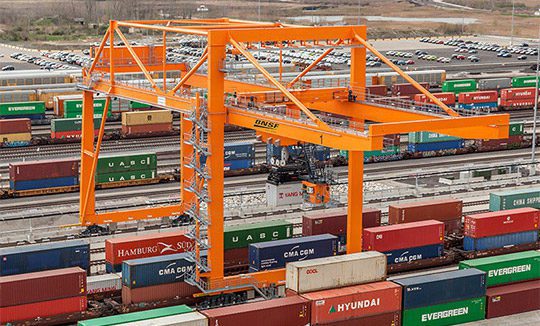 The Santa Fe Railway's historic Barstow Yard in southern California has long been a vital part of the rail network in the southwestern U.S. Now, a new BNSF facility will be even larger - much larger.

Barstow yard has always been a critical facility in the Santa Fe and BNSF network.

This week, BNSF cemented the legacy of this area by announcing plans to spend more that $1.5 billion to construct a state-of-the-art master-planned rail facility just west of the current Barstow yard’s location. This is the first such facility ever developed or being developed by a Class 1 railroad.

The new facility will be known as the Barstow International Gateway, comprising 4,500 acres and sporting a rail yard, intermodal facility, and warehouses for transloading freight from international containers to domestic containers. The facility will also enable the movement of containers from ships at the Ports of Los Angeles and Long Beach to trains for movement to Barstow through the Alameda Corridor. Upon arrival at Barstow, containers will be processed at the facility using clean-energy powered cargo handling equipment, and then staged and built into trains moving east via BNSF’s network across the nation. Westbound freight will similarly be processed at the facility to more efficiently bring trains to the ports and other California terminals.

The new facility, along with the Alameda Corridor, should help the periodic congestion seen at the Ports of Long Beach and Los Angeles. Indeed, Katie Farmer, President and CEO of BNSF says “By allowing for more efficient transfer of cargo directly between ships and rail, the Barstow International Gateway will maximize rail and distribution efficiency regionally and across the U.S. supply chain and reduce truck traffic and freeway congestion in the Los Angeles Basin and the Inland Empire. This will play a critical role in improving fluidity throughout our rail network, moving containers off the ports quicker, and facilitating improved efficiency at our existing intermodal hubs, including those in the Midwest and Texas. The facility will also have an important positive impact, including the creation of new, local railroad jobs.”