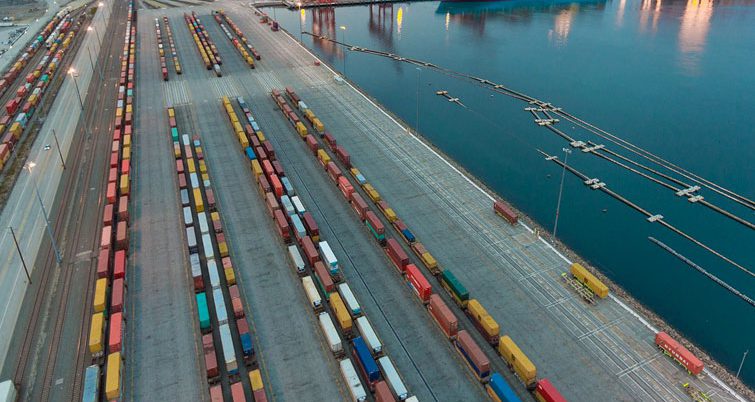 The Long Beach Board of Harbor Commissioners has approved an $870 million budget to build the Pier B On-Dock Rail Support Facility. Demand for on-dock rail in the harbor is expected to double by 2035.

The Pier B facility would not allow trucks and is designed to shift more shipping containers from trucks to rail. Officials say the facility will result in a more efficient and sustainable transfer of cargo, helping the Port of Long Beach to stay competitive and meet environmental targets.

Pacific Harbor Line will operate the Pier B facility, which the port calls the centerpiece of its $1 billion rail improvement program. An Environmental Impact Study was released in late December 2016 and the Board of Harbor Commissioners approved the project in January 2018.

“The Port’s $1 billion rail program is designed to meet the needs of our customers,” said Long Beach Board of Harbor Commissioners President Tracy Egoscue. “Moving more cargo by train helps our marine terminals transfer cargo faster. At the same time, it helps us make progress toward the environmental goals the Commission set in the Clean Air Action Plan and continue to lead the industry on sustainable operations.”

The first arrival, departure and storage tracks are expected to be completed in 2024, with additional tracks coming online in 2030, followed by project completion in 2032.

The port explains that currently, the ability to build long trains is limited due to the lack of adequate yard tracks and the configuration of mainline tracks. The Pier B facility would change this, providing track space to join together sections of trains assembled at terminals. A one-mile-long train can take as many as 750 trucks off the roadways.

“Projects like the Pier B On-Dock Rail Support Facility show our commitment to finding ways to deliver operational excellence for our customers while reducing environmental impacts on the community,” said Port of Long Beach Executive Director Mario Cordero. “This development is strategically planned to deliver several key improvements within the next six years. These will provide major incremental benefits to the Port’s on-dock rail network, improving the flow of cargo to and from our marine terminals.”

Another project at the Port of Long Beach to build an intermodal yard at Pier E as part of the Middle Harbor redevelopment was recognized by the National Railroad Construction & Maintenance Association as the 2015 NRC Project of the Year.