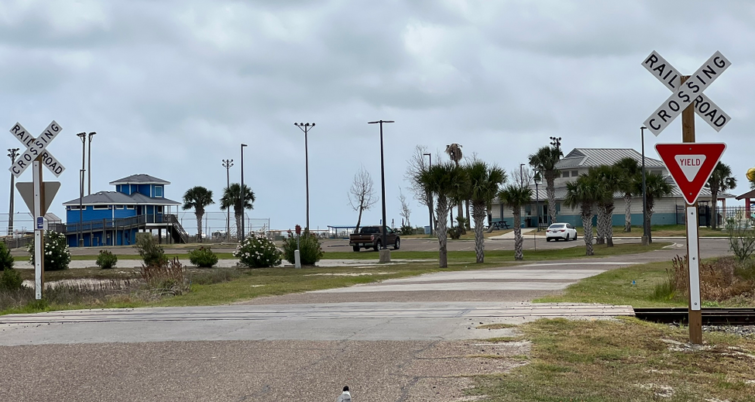 A grade crossing in Aransas Pass, Texas. As you can see, there are now gate arms at the site.

After 20 years off the grid, the Aransas Pass railroad is back in business in Texas.

Residents were hopeful that the line re-start would bring jobs to the area, but Aransas Pass Police Chief Eric Blanchard was pumping the brakes on the excitement.

Blanchard was concerned motorists, especially those pulling boats to and from the marina, were not ready for trains to be moving through. He said the grade crossing was poorly marked.

“Not all of our railroad crossings have safety gates or even safety signals installed, and much of the signage has been there over the years,” the Aransas Pass Police said on its website. “We’d expect that many of our AP natives have become numb to the fact a railroad even exists, and therein lies our concerns. We continue to work with the railroad service seeking the installation of flashing lights or railroad arms to better warn motorists of the impending approach of a train.”

Union Pacific said it is working on active safety warning systems at three railroad crossings. In the meantime, a flagger is stationed at each crossing to help alert drivers.

The city could put up more warning signs if it feels it is necessary.