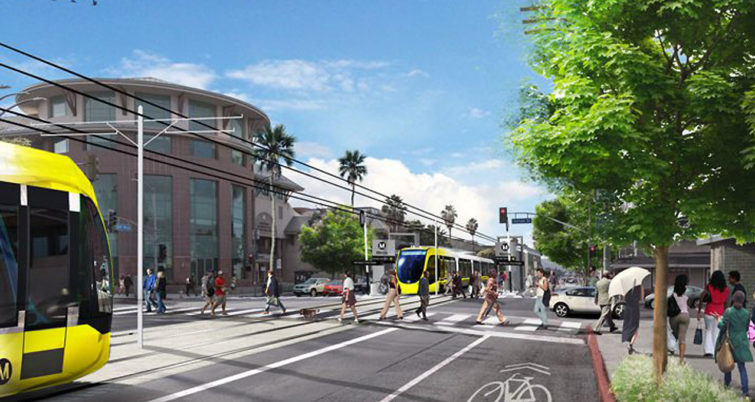 AMM JV will provide administration, inspection services, estimating, and construction management support to LA Metro, which is using the Progressive Design Build (PDB) delivery method for the East San Fernando Valley Light Rail Transit Project. This method brings the contractor and the designer into the project early, to take the design from approximately 30%-60% to approximately 85% completed, while collaborating with LA Metro and third parties, and then to price construction costs.

The first project segment is a 6.7-mile at-grade alignment that includes 11 new stations; traction power substations; and a new maintenance and storage facility that spans 21 acres and will include several buildings using solar photovoltaic (PV) power and excess power storage systems. It is slated to connect the communities of Van Nuys, Panorama City, Arleta and Pacoima along the median of Van Nuys Boulevard, one of the Valley’s busiest corridors, according to LA Metro (see map, above). Service is expected to begin between 2028 and 2030.

A 2.5-mile, three-station segment is also planned to further extend the line from Pacoima to the Sylmar/San Fernando Metrolink Station. Design options for that project segment are now under study. It will be built on LA Metro-owned right-of-way along San Fernando Road in a second project phase.

The total cost for the East San Fernando Valley Light Rail Transit Project is estimated at $1.6 billion to $2 billion. It will be the first street-running, local-stop rail service in the San Fernando Valley in 70 years. The last Pacific Electric Red Cars discontinued service along Van Nuys Boulevard in 1952, according to LA Metro.

As Construction Management Support Services consultant, AMM JV reported that it has contracted 10 disadvantaged businesses—women-owned, Latino-owned and Black-owned—to perform more than 30% of the work on the project, surpassing the 28% Disadvantaged Business Enterprise (DBE) requirement. AMM JV’s contract with LA Metro is expected to run through September 2029.

“35% of residents who live in the project area are transit-dependent, more than double the rest of LA County,” Macaria Flores, Los Angeles City Executive for Arcadis, said. “Nearly 20% of residents don’t own a car. The construction of this light rail will be transformative for the community and deliver much needed multi-modal transit options.”

Ernie Figueroa, West Unit General Manager for Mott MacDonald, added: “We are proud to be part of the construction management team that will bring new, sustainable, and reliable mobility to a rapidly growing area of Los Angeles.”